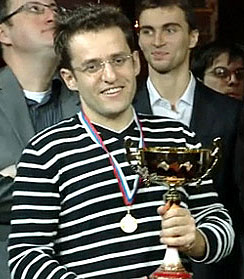 Blitz is something that most chess players enjoy playing. Watching a good blitz battle is as exciting as any sporting competition can be. The tension build-up, the pensive pauses and the culmination of rapid fire moves are facets of blitz we all enjoy. It is no surprise that many of the top players in the world also enjoy this activity and can be seen at the Internet Chess Club in pitched marathon battles.

In Moscow, twenty of the best blitz players in the world (minus Viswanathan Anand) assembled to determined who would wear the crown of the fastest player in the world. The defending champion was Magnus Carlsen, but there were many strong challengers. The tournament was a double round-robin with a three-minute time control with an extra two seconds for each move. GM Levon Aronian of Armenia (above) won the event.

There were 38 rounds of blitz and there was extensive video footage brought by Sergey Sorokhtin giving the exciting ebb and flow of play.