A controversy is brewing in New York after seven chess players were cited with trespassing tickets at a playground for children. The men were playing in Inwood Hill Park when they were approached by police officers who issued tickets (one for each player) for playing at the chess tables built at the park.

According to a report released yesterday at DNAinfo.com, the men were cited on October 20th for being inside of Emerson Playground, a children’s play area inside of the park. This area is off limits to adults unaccompanied by minors, perhaps an effort to prevent sexual predators. In this area there are tables with inlaid chess board separated from the play area by a fence. The authorities cite drug-dealing as the reason for the code, but the players were befuddled at the harassment.

“There is a problem in this area with drug dealing, but the police have time to write tickets to people playing chess?” asked Yacahudah Harrison, 48, who was one of the men cited. The men have to appear in criminal court for the offense of playing chess. People in the community expressed outrage at the citations saying that these men were upstanding citizens and were mentors of many children in the area. 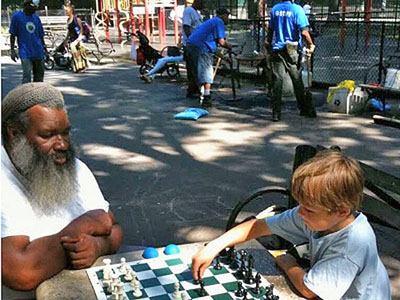 Yacahudah “Y.A.” Harrison playing chess with a neighborhood child this summer on the table with a chessboard inlay inside Emerson Playground at Inwood Hill Park. (DNAinfo/Carla Zanoni)

This is not the first time chess players have been harassed. Years ago in Chicago’s Hyde Park, chess tables were removed after some of the business people complained about loitering. They also cited drug-dealing in the area. Earlier this year in San Francisco, chess players on Market Street were moved from the main district to a side street after having been at the locale for nearly 30 years.

Most of the men playing in these parks are typically of African descent. According to chess player Aggrey Duncan, another case in Newark, New Jersey during the early 90s saw 40 players banned from a park. He added that the same fate met players in Brooklyn.

Chess-players playing in the park on Eastern Parkway, between Washington and Classon, became the targets for continuous harassment and ticketing for being in the park after 6 p.m. This park known to many chess players as Mount Olympus, and which gave rise to GM Maurice Ashley, and was visited on many occasion by the Number one player of Italy, GM Fabiano Caruna, when he was a kid. This very park which saved a lot of minorities from roaming the streets, by being actively engaged in a positive mental exercise.

The players in Inwood Hill Park have made a makeshift table on top of a stone wall to play. Captain Jose Navarro stood by his officers’ actions. According to DNAinfo.com, Navarro stated, “Under my direction, uniformed officers routinely enter the parks to enforce closing times and other regulations; all designed to protect the community.”

Protecting the community from chess players? Could it have been more prudent to issue a verbal warning so that these issues could be addressed, or is this yet another attempt to harass men of a certain ethnicity and/or class? The irony in all this is that chess is an integral part of the fabric of New York.

With the added legend of Washington Square Park and the 24-hour chess shop in Greenwich Village, there has been a reverence for the game since Bobby Fischer walked the streets of New York. The recent policed harassment of the players in Inwood Hill is certainly a questionable decision given that the tables were put there for the purpose of people using them.