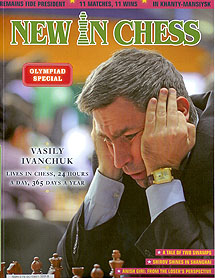 What is Maurice Ashley doing these days? A lot of things. He’s not behind the board yet, but he was recently seen on the pages of New in Chess (2010/7). He penned an article about the World Chess Challenge, a match between Magnus Carlsen and the World.

The world was led by a tripartite of GMs (Hikaru Nakamura, Judit Polgar and Maxime Vachier-Lagrave) who would make moves independently and have them voted on by the fans. Carlsen won the game handily.

Ashley served as commentator along with Garry Kasparov as the game received widespread attention. Ashley’s article captured the moment in a very candid style. It appeared to be a gallant affair that brought out the chess stars along with the fashionistas. Carlsen’s likeness has also appeared in ads all over Europe and perhaps gives a new face to chess. 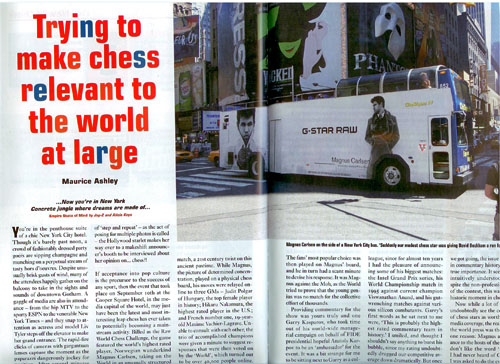 More recently, Chessbase ran another feature on Ashley. He had been featured previously because of his new ChessBase instructional DVD, but this article dealt with an interview he did with “Big Think”. In this interview, he discusses his background, how he was drawn to chess and its intricacies. He also discussed his road to Grandmaster and how those of his ilk may approach the game. Interesting!