NM Marvin Dandridge featured on the cover of the February 1985 edition of the Illinois Chess Bulletin. His games have appeared frequently in “Chess Crackers”.

The last entry of Chess Crackers. of the year will feature games of new and old. Watu Kobese’s classic win over Alexander Yermolinsky is good for another look. Ronald Simpson’s recent win over Boris Gulko won some acclaim as a candidate for “Game of the Week” in the U.S. Chess League. Young Master Justus Williams showed maturity in finishing off his opponent on the world stage. Finally, the ever-dangerous tactician Marvin Dandridge showed why he was such a feared opponent in the Chicago area in the 80s and 90s. 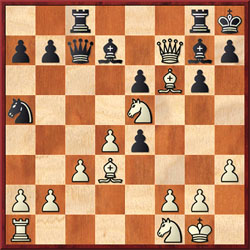