Round #5 Analysis: Now at the first rest day the field is shaking up as there are now only three teams with a perfect score. Both Russia 1 and Russia 2 fell to Hungary and defending champions Armenia. Peter Leko scored a very impressive victory over Alexander Grischuk who was in place of a resting Vladimir Kramnik. Some questioned the decision to rest Kramnik in this crucial round. The loss with the first full point given up either of the Russian teams. 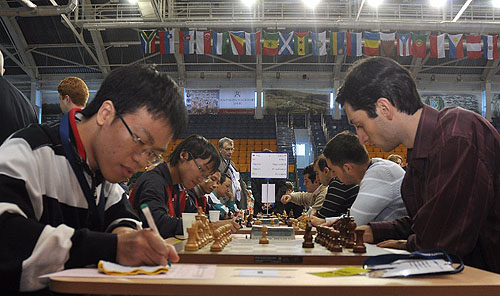 Vietnam pawns off against Georgia.
Photo by ugra-chess.com.

Georgia continues its run with a convincing 3½-½ win over the Vietnam side. Baadur Jobava was interviewed and asserted that he focused play after his loss to Mexico’s Manuel Leon Hoyos resulted in his win over Magnus Carlsen and then the rising Le Quang Liem. Georgia is now at the top of the table. In other action, Poland and the Netherlands traded a pair of wins and draws and split the match 2-2.

Ivanchuk continues to steamroll his competition with 4/4 and a 3315 performance. The question always seems to be “Which Ivanchuk will show up, the 2800 or the 2600?” It is clear that at Olympiad tournaments, he is generally in top form. Here is his miniature against Ivan Sokolov of Bosnia. (See Sokolov-Ivanchuk)

Interesting matches after the rest are Georgia-Armenia, two neighboring nations with rich chess traditions. Vietnam-USA should also have an intrigue with the possibility of two of the brightest young stars in Le Quang Liem and Hikaru Nakamura facing off on board #1. Russia 3 is lurking in the trenches and looks to join the other Russian teams which have thus far, avoided each other. As we get deeper into the tournament, this could damage Russia’s medal chances as they will certainly be look to win crucial matches at the end.

Round #5 Analysis: Exciting round as the top teams are battling. Ukraine beat Bulgaria on the strength of the bottom boards and have now moved into the top position. They will face Russia 1 who beat a tough China side. Zhao Xue played a very powerful game against Alexandra Kosteniuk. However, Nadezhda Kosintseva beat a previously undefeated Ju Wenjun and Kosintseva Nadezhda beat Huang Qian who has now lost two in a row.

The USA moved up in the race on the shoulders of Tatev Abrahamyan’s nice attacking win over Slovenia’s Darja Kaps. (See Abrahamyan-Kaps) The Americans will play the defending champions Georgia in round #6. On the lowers, we also have inspired play that is often overlooked. Epah Tembo of Zambia got a nice win over previously undefeated Deborah Richards of Jamaica.