Explosive day in Khanty Mansiysk today. With top teams jockeying for position before the rest day, there were some questions that needed to be answered. Will Russia 2 continue their impeccable form? Would Armenia stay in the running to defend their crown? Has Jan Smeets recovered from his shocking first round loss? Would the USA exact revenge for the Dresden loss? There is also the overachieving Vietnam lurking in the wings. These questions were answered.

Russia 2 soundly beat India 3-1 on the strength of wins by Ian Nepomniachtchi and Nikita Vitiugov. This young team has so far proven the best form in the tournament. In 2006, Vladimir Kramnik expressed concern about the future of Russian chess and stated (at the time) that he did not see any fresh talent. This is development should reassure him. 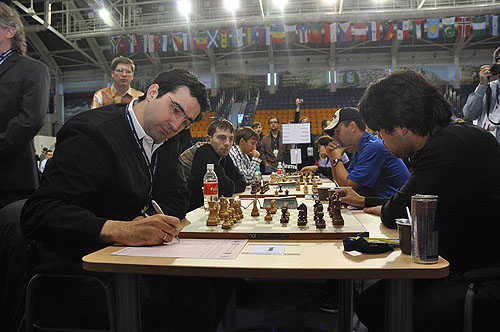 Russia vs. USA turned out to be anti-climatic.
Photo by ugra-chess.com.

However, Kramnik and his Russia 1 is busy trying to catch Russia 2. They helped their cause by upstaging the USA 3-1. The Kramnik-Nakamura King’s Indian had the typical ebb and flow with white seeking queenside initiative and black a kingside attack. There was a question as to whether Nakamura’s 17.Bxg4 Qc7 and the 18.Be2 f3! was part of preparation or was improvised over the board.

Black was able to conjure up active piece play, but Kramnik sacrificed his queen to relieve the pressure. Kramnik ended up with two rooks and six pawns for Nakamura’s active queen and knight with two pawns. According to several commentators, Kramnik was better, but Nakamura’s hyperactivity provided chances.

Nakamura’s suggested improvement 34…Nc2 was debated. Nevertheless, the game ended in an a draw and was one of the exciting games of the round. (see game) Unfortunately, Kamsky lost a tough battle and Onischuk was run over by Sergey Karjakin.

Armenia edged a strong Russia 3 team 2½-1½ to move to the top for a date with Russia 2 in a pivotal match. The Netherlands beat Spain 3-1 and will have a tough 5th round match with Poland. Jan Smeets seem to have recovered a shocking first round loss and coasted to a 13-move draw with Francisco Vallejo Pons.

On a side note, Magnus Carlsen managed to carry his Norway team to board #6, but his overmatched team was destroyed by Georgia 3½-½. Jobova Baadur beat Carlsen and the rout was on. Vietnam keeps charging after delivering a 3½-½ crush on Estonia. Ukraine beat Slovenia 2½-1½ on the shoulders of Ivanchuk who gave Slovenia’s Beliavsky an old-fashioned flogging.

Round #4 Analysis: The women’s section had very fierce matches on the top boards with no lopsided scores. The Ukraine beat a strong upstart Cuban team 2½-1½. The Cuba has silver medalist Oleiney Linares Napoles on board #2, but she fell to GM Natalia Zhukova. The Ukraine will play a pivotal match against Bulgaria and former Women’s Champion Antoaneta Stefanova. Russia 1 took care of business by beating the Olympiad champions on the strength of Alisa Galliamova.

I can confidently say that she’s the weak link in our team: she’s finding playing very tough, making mistakes, blundering… Alisa is burdened by a family, children and she asked to be let out of the training camp early – in general, it’s clear that in the decisive matches our women will have to play without her. Perhaps Galliamova will still find her form, she’s got colossal willpower and experience, but it’s clear that she hasn’t approached this event as the most important one in her live. (see article)

Earlier Bareev had called the Peruvians a team of “peasant farmers”. This doesn’t show level thinking and may endanger the Russian side out of gold medal contention. Neverthless, Galliamova carried the Russia 1 team to victory winning over an equal opponent, Bela Khotenashvili. Hungary and the USA played to a 2-2 with “blood on the boards”. All four games were decisive. Bulgaria edged India with Stefanova beating Dronavali Harika… not a good day for Team India. China edged a tough Serbia team as Zhao Xue continues to struggle with consistency. However, the Lady Dragons won on board #2 and #4 while Hou Yifan drew. China will play Russia 1 in round #5. 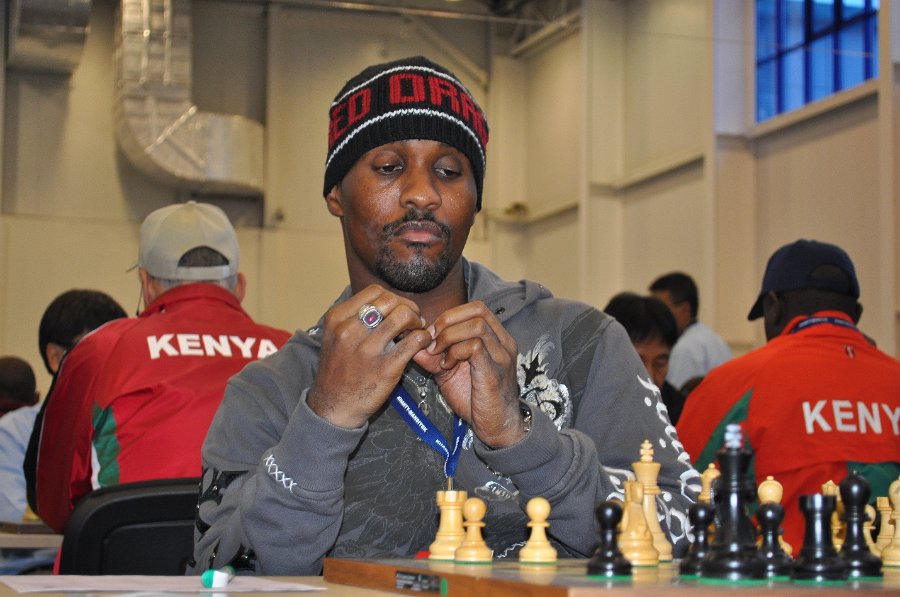