Round #3 Analysis: Things are heating up as we enter a pivotal round. In Dresden, top teams started facing each other in round four and this tournament is no exception. We are about to meet a showdown of powers.

In this round, we had some interesting results. The first two boards were drawn. Croatia and Ukraine traded wins on the bottom boards. The Croats have performed well on the bottom boards getting key wins against strong opposition. Palac’s Gruenfeld scored against Alexander Moiseenko in fine style. Poland and Bosnia also split the match point with a titanic battle on board #1 between heavyweights Radoslaw Wojtaszek and Ivan Sokolov (who toppled Michael Adams). The game was a tactical slugfest ending in a nice finesse for the Bosnian player. It is interesting that Sokolov was born of a Bulgarian father, a Croatian mother, now lives in the Netherlands and is playing for Bosnia! 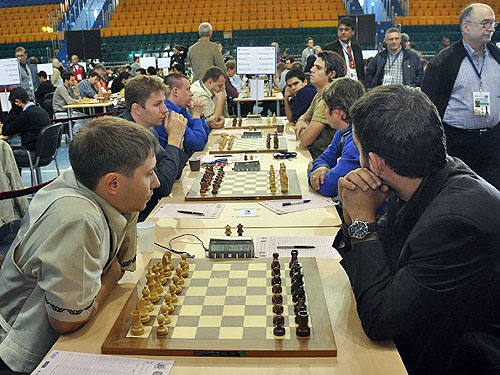 Russia 3 enroute to beating Cuba 2½-1½. Alexander Motylev on board #2 said in an interview that the ‘Ugra representatives’ want to make a good showing. Photo from ugra-chess.com.

In other action, the other Team Russia is marching toward an imminent battle with chess’ top brass. Russia 1 beat Italy 3-1; Russia 2 crushed Peru 3½-½; Russia 3 got an important win over Cuba 2½-1½… Sergei Rublevsky’s exciting win making the difference. This means that Team Russia will prepare to meet each other in coming rounds. This could hurt their chances. However, for round #4, the big match up will be Russia 1 versus the USA. Russia 2 will play India’s powerful lineup and Russia 3 will play two-time defending Olympiad champion, Armenia. The Russian teams will try to avoid each other, but it may be better to face each other early on.

Egypt has certainly raised their level for the tournament and got an impressive victory over Switzerland who is playing without Viktor Korchnoi (not been feeling well). African Champion Bassem Amin won in his typical grinding fashion. The North African nation will face Poland on board #9. In a number of neighborly matchups, Trinidad and Tobago will face Barbados, Ghana will face Nigeria and Botswana will face Namibia.

Round #3 Analysis: Russia1 asserted their presence by putting a 3½-½ crush on Slovakia. Russia 2 was held to a 2-2 draw with Germany putting and all-Russia battle off for another round. Defending champions Georgia will get a stiff test against Russia 1. China moved up into the upper ranks with a 3-1 win over Latvia. They’ll face Serbia. One of the pre-tournament favorites Ukraine beat Azerbaijan and will play Cuba on board #1. Watch for a possible upset here. The USA is back in the leader pack with a win over regional rival Argentina. They will get Hungary on tomorrow. Fortunately, for the Americans, the Polgar sisters are not playing for the women’s team.

Deborah Richards in on 3-0 for Jamaica. Here she is on the left with her teammates Margoe Williams (board 4), Annesha Smith (board 5), Krishna Gray (board 2) and Ariel Barrett (board 3). Photo by Ian Wilkinson.