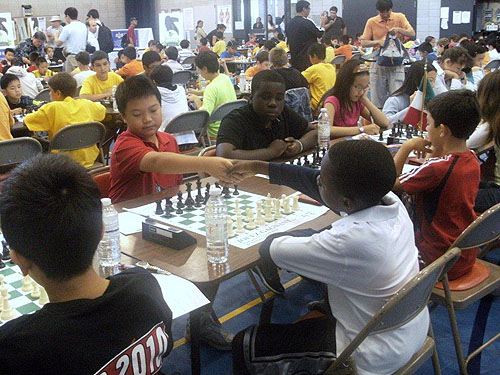 Michael Song getting set to play Joshua Colas. Justus Williams on top board against William Graif. Photo by Guy Colas.

Justus Williams and Joshua Colas recently returned from their first international trips to Brazil and Trinidad, respectively. Both had credible results and were intent on using the experience as preparation for the World Youth Championships in Greece later on this year. However, the families of both stars decided that the North American Youth Championship in Montreal, Canada would also afford the two players a training ground for the upcoming tournament in October. Darrian Robinson, already an international traveler, had also joined the tournament.

Justus and Joshua were seeded #1 and #2 in the under-12 section and started well. As fate would have it, the two were paired against each other in the penultimate round six. Justus won the game and set up a battle against Michael Song with white. The game started with a customary 1.Nf3, but then descended into a weird Blumenfeld Counter Gambit reversed after 1…d5 2.c4 d4 3.e3 c5 4.b4!? Justus attacked swiftly, but overextended his center which collapsed. Black picked off more pawns and won comfortably. Justus had to be content with the bronze medal with 5.5/7.

Joshua was in the hunt after five rounds with an undefeated four points. However, he faced his friend Justus in round six. Guy Colas told The Chess Drum that both players played the game cautiously out of mutual respect. It appeared at one point that they would repeat moves, but Joshua played 19…h6?! and went astray shortly thereafter. On 25.Nd4 Bc5 white played 26.Nc6 forking the queen and rook. Black possibly miscalculated that he’d have an attack after 26…Bxf2+ 27.Kxf2 Rd2+ but on 28.Ke3 Qd6 white simply has 29.e5… another fork. Joshua couldn’t get enough compensation for the sacrificed material and eventually had to resign. Joshua then played a Sicilian-turned French in the last round and missed opportunities to snatch the initiative. In a crucial moment, Joshua walked his king to the edge of the board and was facing mate or massive material loss. Thus, he ended on 4/7.

Darrian Robinson played in the depleted under-16 section for girls which had only seven players. She ended on 5.5/7 and lost only to gold medalist Anna Matlin. One wonders if Darrian would have been challenged more playing in a tougher section such as the under-16 Open. As she works toward National Master, she will need stiffer competition to rise to that level. Nevertheless she took home the silver medal and will add to her impressive collection of accolades.

The Challenges of Black Chess Masters

Ashley DVD: "The Secret to Chess"