Eleven-year old Josh Colas’ upset win over FM Ryan Harper was the highlight of the round. While Colas has beaten a number of strong Masters in his short career, this win punctuated his international debut. Playing against Harper’s pet Dragon, Colas played 6. h3!? and after 6…Bg7 7. Be3 O-O 8. Bd3?! e5 9. Nb3 d5! black seemed to have solved his opening problems. 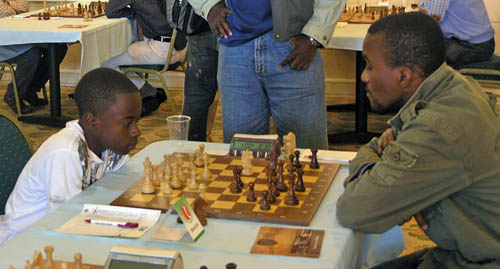 Harper then dawdled with a number of queen moves trying to force mistakes, but Colas sacrificed a pawn and grabbed the initiative with rooks penetrating the black camp. Colas ended up winning a pawn with a favorable 3+2 pawn formation on the kingside and was able to win another pawn. The rest was easy.

Immediately the shock resonated around the hall about Harper’s loss. Only those outside of the U.S. will be surprised at the result as Colas has beaten strong players including the well-known IM Jay Bonin. In other action, Sagalchik cemented his lead with another win and at the end of the day, remained a half-point ahead of IM Rafael Prasca. There were five players tied on 5.5/8.

In the under-20, FMs David Finol and Keron Cabralis continued to dominate the field with wins. This puts them on 7/8 while Vishnu Singh was eliminated from the top prize after losing to Esan Wiltshire. In the under-14, Joshua Johnson had a full point lead over the field and needs only a draw to clinch the top prize. Christian Ammon, who led for much of the tournament, fell back with a draw. Under-10 section saw Justin Labistide pull out front with a crucial win over Lawrence Foreman, who had led for most of the tournament.