Anthony Goldbloom informed The Chess Drum of a World Cup competition. This was not the World Cup of Chess, but one dealing with chess ratings. This World Cup is designed to find a new chess algorithm for rating classifications. Jeff Sonas, the organizer, has been an authoritative figure in chess circles and is the creator of the Chessmetrics rating system. Here is Goldbloom’s assessment:

Within 24 hours, two teams had already created algorithms that made more accurate predictions than Elo. It’s no surprise that Elo has been outdone — after all, the system was invented half a century ago, before we could easily crunch large amounts of historical data. What is surprising is that statisticians have been able to outperform Elo so quickly!

By way of background, the competition requires entrants to build their rating systems based on the results of more than 65,000 historical chess games. Entrants then test their algorithms by predicting the results of another 7,809 games. 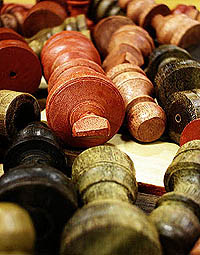 There have been so many debates on the current ELO system which was created in the U.S. back in the 1950s by Arpad Elo. The system has been the standard since, but has run into criticism for being unable to adjust for rating inflation. Many of the age records are falling and the curve for sharp improvements have risen in the age of technology diffusion.

In 1979, only Anatoly Karpov had a rating of over 2700. As of August 2010, there are 37 players over 2700. There are now three players at 2800 for the first time in history. Magnus Carlsen leads the way at 2826 and many are projecting that he will break Garry Kasparov’s record of 2851. While breaking that record is inevitable, what remains to be seen is whether the new system will make it more difficult to surpass Kasparov’s plateau.

In defense of the ELO system, it was chosen as the most accurate predictor of the World Cup Soccer championships. While it incorrectly had Brazil at #1, it had Spain and the Netherlands in the next positions. Spain won the Cup last month beating the Netherlands.