IM Oladapo Adu will face his biggest test yet as he is poised to face the tournament’s top-seed in GM Gennadi Sagalchik. While a win will almost certainly put him in a position to win, Sagalchik has saved energy with two quick draws and may be going for the win in this bout.

At this point, Adu (on 4.5/5) leads by half-point over Sagalchik, IM Kevin Denny and Ariel Marichal. There is a quartet of players on +1 with IM Rafael Prasca, IM Julio Ostos, FM Ryan Harper and IM-elect Jomo Pitterson a point back. 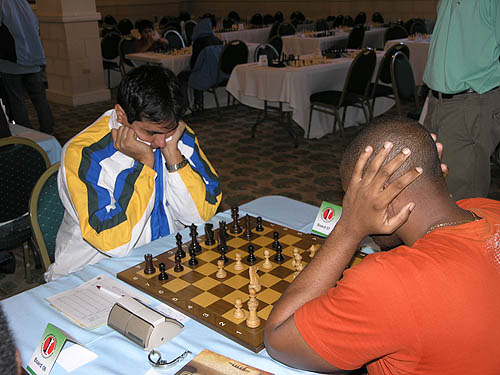 After beating Ostos, Adu drew with Marichal in what he admitted was a fortunate escape. Sagalchik made a quick draw with Prasca and in round four beat IM Terry Farley in a game filled with interesting opening ideas. Denny scored two wins on day to keep pace. He is one point off the pace with a test against Cuba’s Marichal. Prasca got back into the winning column with a win over Ravishen Singh. 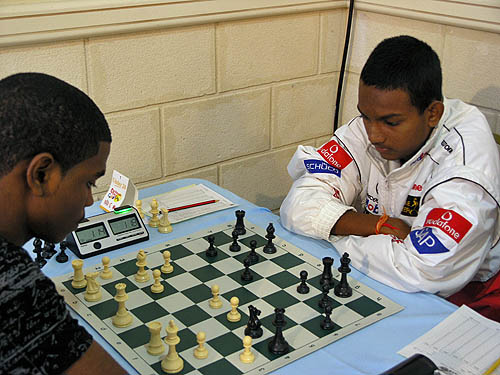 In the under-20s, Keron Cabralis is now alone atop the field with another win over Vishnu Singh. Cabralis seemed to be under a bit of pressurem but was able to wade through the complications and win a nice ending. FM David Finol won a nice attacking game against Calvin Tjong Tjin Joe with a snappy rook sacrifice and combination to win the queen and the game. Finol will meet Cabralis today.

In the under-14s, Christian Ammon is on a perfect 5/5 and leads Joshua Johnson by half-point and the two will battle in round six. The under-10s has yet another perfect score with Ashwari Akloe of Suriname scoring 5/5. Known for her stylish hats, she is certainly taking the field by storm. Lawrence Foreman of Jamaica trails by the narrowest of margins and will attempt to commandeer the lead in round six.