GM Loek Van Wely of the Netherlands faces
GM Viktor Laznicka of the Czech Republic in the last round.
Photo by Daaim Shabazz.

The World Open moved from City Center to Valley Forge. This change of venue was not greeted with enthusiasm, but there was still lots of exciting chess ready to be played. The field was stacked with talent despite the absence of Hikaru Nakamura. A strong Indian contingent and several of the world’s top brass trekked to King of Prussia. The venue was certainly not a gleaming example befitting the status of such a tournament, but a thousand competitors filled the giant convention hall and braved the searing summer heat.

Francisco Vallejo-Pons and Loek Van Wely have much more in common than cheering for their national teams in the World Cup (both are now in the final). Both were expected to be in the hunt for the title, but unfortunately, neither finished in the running. Top-ranked Vallejo-Pons ended on a disappointing 6/9 with five draws! 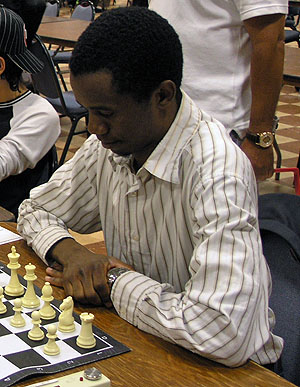 The star of the tournament was 22-year old Viktor Laznicka from the Czech Republic. In a show of dashing bravery, his maiden tournament in the U.S. was accented by six straight wins. At that point, he was a full point clear of the field. After two draws, he sat down in his chair needing only a draw with Van Wely to win the title. To the amazement of many, he spurned a draw offer to play on in a better position. The game was one of the last to finish but ended in a draw nevertheless. Laznicka would take home $17,413.00. GMs Pentala Harikrishna, Ilya Smirin and Luke Shane were joint 2nd and took home $5,028.67.

In the under-2400 section, FM Victor Shen blitzed the field with a scorching 8/9. He won his first seven games, but still only won by half-point over IM-elect Farai Mandizha who has been playing stellar chess as of late. The Zimbabwean earned norms in the New York and Philadelphia Internationals and should be close to reaching the required 2400 ELO. In joint 3rd was IM Chandrashhekhar Gokhale, WIM Alisa Melekhina and IM Oladapo Adu.

The World Open tournament will move back to Philadelphia’s City Center. Before the last round, Tournament Director Boyd Reed announced this news to sighs of relief. The Scanticon Convention Center does not appear to have met the standards for the World Open. There were complaints about the location and the fact that one needs a car to find a variety of food choices.

In addition, those staying at the Clarion Hotel had an irregular shuttle service and could not choose to walk a few blocks since there were no sidewalks. One Grandmaster walked a mile each day to the playing site because his hotel did not have a shuttle service. The playing room was tantamount to a basement and the lighting was not ideal. Even the trapped bird did not approve of the conditions. See you next year!