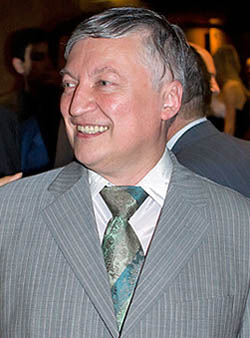 FIDE is in the midst of a fierce campaign to elect the next head of the 158-member chess organization. Kirsan Ilyumzhinov is the current President and has waged a battle to extend his 15-year reign. His opponent is the 12th World Champion, Anatoly Karpov who has made inroads to many federations including several countries with schools in his name.

Typically a challenger has to have a very clear strategy to prove they can do a better job than the incumbent. Thus, Karpov is making his rounds to different regions to make his point. Currently Karpov is visiting the subzonal 2.3.5 to present his platform to officials and players from 15 Caribbean nations.

Chess journalist Michael ‘Mig’ Greengard of chessninja.com told The Chess Drum that Garry Kasparov is supporting Karpov’s thrust in the Caribbean after having visited Central America. Champions #12 and #13 have reached an unbreakable detente since their heated rivalry ended. Karpov recently had a fundraiser in New York and enlisted the support of world’s #1 player. Magnus Carlsen.

The Karpov 2010 campaign is looking for an audience to explain their vision for the next era of chess. He will be in the Bahamas for three days and hopes to set up meetings with the delegations at the subzonal. Greengard who has joined the Karpov team:

We are attempting to set up meetings with as many federation people as possible to listen to their concerns and ideas and to share those of Karpov’s campaign.