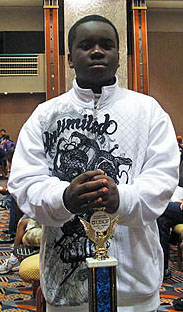 Ever since Justus Williams burst on the scholastic scene, the word on him was, he had a very mature style for a scholastic player. With many scholastic players, there is a tendancy to over-emphasize openings and tactics to the neglect of sound positional principles.

There is also another attribute spectators notice about young Justus… his patience and board demeanor. These are rare qualities and perhaps prerequisites to reaching National Master level. So the new question is, “When will Justus Williams reach Master level?” The answer is an open-ended, “Soon.”

Justus won the 2010 K6 Elementary championship last month adding yet another notch to his impressive start. He is already a scholastic All-American and will represent the U.S. at the World Youth Championship in Haldiki, Greece in October. He is currently playing in the New York International and hopes to compete in the World Open in July.

Justus is someone to keep an eye on!