Would Veselin Topalov come out blazing after taking one on the chin in Game #2? It just so happened that he attempted to take the initiative, but Viswanathan Anand was more than willing to take up the fight. Anand took a page out of Vladimir Kramnik’s book by introducing the ultra solid Slav.

On the ICC, there were question about white having some chances to press black’s centralized king, but nothing materialized. In fact, it appeared that Anand was the one playing for the advantage as white’s pawn structure stifled his bishop. Nevertheless, the queenside pawns were liquidated and the game entered into a dull rook ending.

While the game was not entertaining, there was a side story. Before the match, Topalov had declared that he would follow the Sofia rules and that would not speak to his opponent. Thus, went to the arbiter to claim a draw. The arbiter came to the table, but said nothing and watched Anand make his move. The position repeated thrice and so a draw was declared. (See Game #3) 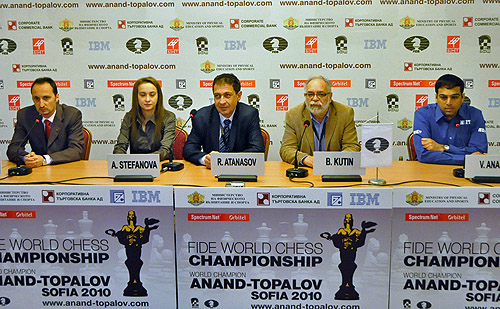