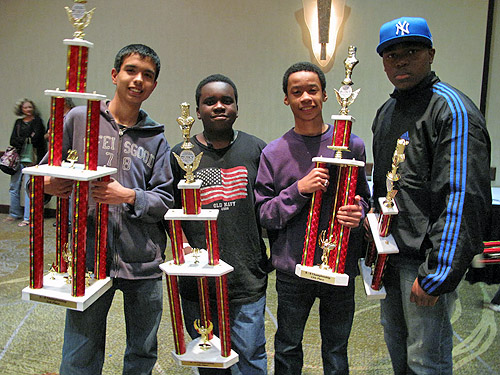 Back in the late 70s and early 80s, a dominate force rolled through junior high school chess. Vaux Jr. High of Philadelphia won seven consecutive national championships and eight overall. This was quite an accomplishment for a school from the Philly’s rough inner city. Howard Daniels led Vaux and would become a National Master at age 15 years, 4 months, the youngest Black player to accomplish that feat. Daniels would hold that record until Kassa Korley of New York broke it at 15 years 2 months. However, there is a cadre of young players at Brooklyn’s IS 318 who may shatter that record.

Brooklyn is famous for producing Bobby Fischer and of course Maurice Ashley is another favorite son, but IS 318 is amassing quite a collection of trophies. With the recent Junior Highschool Championship, they continue on a beaten path to greatness with some of the most talented young players in New York. The K8 Jr. High team was led by Alexis Paredes and bolstered by Justus Williams, Jehron Bryant and Pobo Efekoro. The school almost got a “double” by nearly winning the K9 section as well.

That team (James Black, Nigel Bryant, Miguel Garcia, Miles Foster) came in 3rd place after leading throughout the tournament. Vela Middle School from Brownsville, Texas won 1st place. According to coach Elizabeth Vicary, “The K-9 was a bit of a heartbreaker. We had a one point lead going into the last round and needed only one win in any of 8 games to tie for first and win on tiebreaks. every single kid lost.” Greg Shahade later corrected this stat to six games, but the point was clear… K9 team fell short.

With the school year coming to a close, IS 318 is ending on another successful campaign. With more trophies to add to their cases which line the hall, the young players will go off on the summer tournament circuit looking for more competition… and rating points! Beware!