Prior to the devastating earthquake that leveled the city of Port au Prince, the Fédération Haïtienne des Échecs (Haitian Chess Federation) held their National Championship from December 11th to 20th. After nine rounds of fighting chess, Mondoly Sanon won the event with an undefeated 7½/9.

Mondoly, 29, previously won the championships in 2001 and 2005 and was runner-up in 2006 to Piersont Lebrun. In their head-to-head encounter, Mondoly capitalized off of a blunder and wrapped up the tournament victory. Luxema Jacques Muller was second place with 6/9.

Unfortunately the tournament lost its sponsor, and thus, did not offer a prize fund or an awards ceremony. The Haitian Chess Federation asserted that there were no funds for such expenses. Their previous sponsor invested in a dominoes tournament. The federation did receive support from the Haitian Olympic Committee at the last minute. The event was held at a television station, but after five rounds, they moved to the Hotel St. Louis for the remaining four rounds. 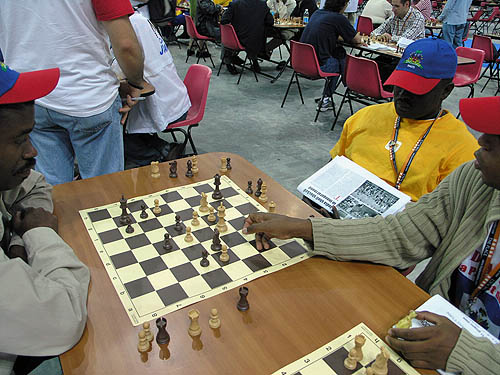