Jehron Bryant is the latest of the competitive New York scholastic crew to break the vaulted barrier of 2000, the necessary route to chess mastery. This represents the 4% of skill level in the nation (of all ages). Bryant and twin brother Nigel Bryant are two scholastic stars destined for great things in chess.

As the father of the 13-year old twins, Derrick Bryant has led their development and has been a chess promoter in Harlem. Back in 2008, he organized the Harlem Chess Championship, but it was already known that his twins were quite talented.

Jehron is the latest of the cadre of New York area players who have recently reached the “Expert” level. He follows Medina Parrilla, Darrian Robinson, Josh Colas, Justus Williams, Miles Hinson and James Black. His brother Nigel is not far behind. Kassa Korley, also of New York, broke the age record for National Master of African descent. This record will no doubt be shattered in coming months. 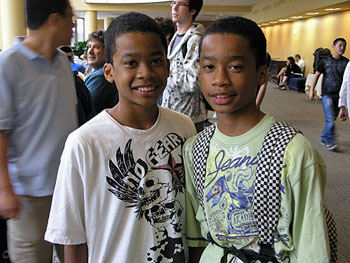 Perhaps Jehron’s biggest fan is his mother Belinda Pura. It is no surprise that each of the scholastic players above have tremendous support from parents.

As they always say, behind every sucessful man is a woman, and I can say that I am not only behind nor beside one successful man but two, I am Belinda Pura (Mrs. Derrick Bryant), the proud mother of the Bryant twins.

It will be interesting to see how the young talent develops in the New York area. The Chess-in-Schools program appears to have been the lightening rod for activities of area schools and has helped provide the environment for chess excellence. I.S. 318 is developing a strong tradition and perhaps will soon be credited with producing some of the youngest masters in the country! 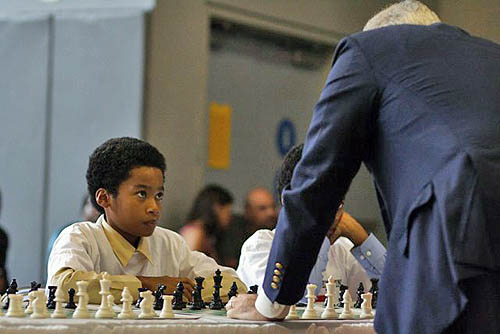