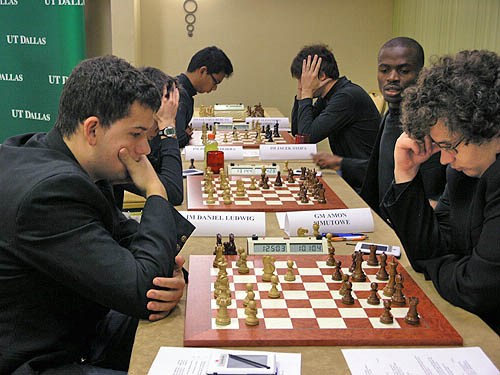 The University of Texas-Dallas (UTD) is gearing up for the Pan-Am Intercollegiate tournament with tune-up tournaments featuring most of the team members and a few Grandmasters.

UTD has been embroiled in a rivalry with University of Maryland-Baltimore (UMBC) for the past decade, but this year the field will be more crowded. Due to a resurgence of Texas Tech and University of Texas-Brownsville, UTB will need to continue bringing on young talent to keep pace. UTD also has a chess club open to all interested persons and Karina Vazirova serves as the President. She told The Chess Drum that approximately 20 members have signed up.

The invitation began this weekend on the eve of the 46th anniversary of the Kennedy assassination. The Chess Drum’s Daaim Shabazz was on hand to catch the opening ceremonies and the beginning of round one. He was in town for a conference.