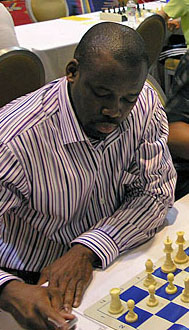 International Master Oladapo Adu nixed plans to compete in Tripoli, Libya in the African Championship, but has a busy schedule which includes competing in the Caribbean Chess Carnival in Port of Spain, Trinidad from August 4th-9th. This event is hosted by the Trinidad Chess Foundation and organized by Edison Raphael.

Adu will then compete in Abu Dhabi, United Arab Emirates (UAE). This tournament is sponsored by Sheikh Hammed and will no doubt boast excellent conditions. The U.S.-based Nigerian national will then travel to Lagos, Nigeria for vacation. Adu recently came off a successful World Open with 6/9 in the under-2400 section. All the best!