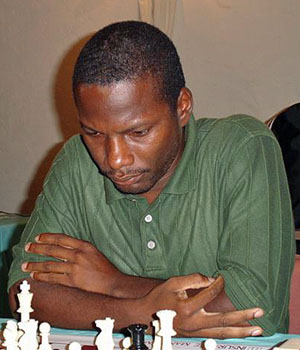 In April, 2007 the Bahamas Chess Federation had for the first time Bahamian Chess Players listed on The World Chess Federation (FIDE) Rating List. There were five players as first. Three additional players were added over the next two years. FIDE rating list was officially published today (1st July, 2009) and the list of Bahamian Chess Players with a World Rating has increased by five. These players are Joseph Ferguson, Milton Evans, Leroy McLean, Philip Paul and Edmund Deal.

National Champion Ken Gibson (above), is now the highest ranked Chess Player in The Bahamas having displaced Elton Joseph whose rating was reduced following his result in the recent New Providence Invitational 2009.

Federation President Kean Smith, said that The Bahamas Chess Federation and its players continue to show that they have a place in the World of Chess. “Being able to host FIDE rated tournaments have allowed the BCF to improve our organizing skills. On the other hand it has provided players with new motivation to improve their Chess skills. This experience has been beneficial for all.” Smith said that they will bring more focus on promoting the Sport to a wider and younger audience and formulate ways to attract strong competition to The Bahamas for its players, particularly its FIDE rated players. We are optimistic about being able to accomplish this because we have had brief discussion with both The Ministry of Sports and The Ministry of Tourism which revealed opportunities that we need to explore.