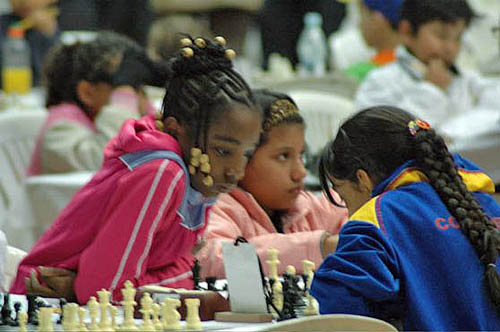 New York is a chess machine. It has been the “mecca” of American chess for more than a century. Fast forward and the age of technology and professional trainers has pushed the development curve down and players are improving at a blistering pace.

Grandmasters are routinely being developed at ages 14-15. The Ukraine’s Sergey Karjakin set the bar for excellence by making the level of Grandmaster at 12 years 7 months. Of course, that record will fall one day. However, for mere “mortals,” chess development may come a bit more gradually. The latest rash of young masters as seen by IM Ray Robson shows that U.S. chess may have a future.

The three are now 200 points away from the coveted Master’s title. Robinson (14) and Colas (10) have age on their side and will improve rapidly. These milestones are important because it shows the potential. There must be support in place to see the talent harnessed and that initial moral support usually comes from family, friends and the communities they originate from.

There are other players such as New York’s Rochelle Ballantyne (1961 at age 13), Isaiah Gadson (1945 at age 13) of St. Louis and Jehron Bryant of New York (1922 at age 12) all show promise. They may shatter all the records of predecessors such as Howard Daniels, K.K. Karanja, Shearwood McClelland III and Kayin Barclay.

Detroit’s Jimmy Canty III (2165, age 16) is not to be overlooked! It’s great to see young players of the various ethnic groups enjoy the fruits of chess. Asians thoroughly dominate U.S. scholastic chess, but many players of African descent are coming fast. Interesting. Let’s keep our eyes out for future developments.

Note: Thanks to Brian Richardson of Texas for the note on Darrian’s accomplishment!

The Myth of Chess "Geekism"