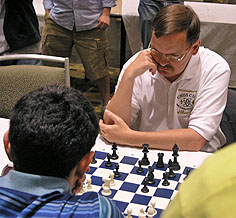 Grandmaster Jaan Ehlvest bested Gabriel Sargissian in the blitz playoff to claim the 2009 Chicago Open title. For decades, Ehlvest has been one of the strongest blitz players in the world. Both players scored 5.5/7 and edged out several contenders in a hotly-contested tournament that included several participants from the U.S. Championship.

Varuzhan Akobian, Alexander Shabalov and Yury Shulman were three such contenders and they ended on 5/7 along with Tigran Petrosian (no relation to the late World Champion), Giorgi Kachieshvili and Benjamin Finefold. Twelve-year old FM Darwin Yang beat a couple of Grandmasters, drew a couple of strong IMs and scored an impressive +1.

Tyler Hughes, another alumnus of the U.S. Championship, score a strong 6/7 to win the under-2300 section. His undefeated score culiminated in a win for the U.S. Junior Champion and perhap his strong month of chess. He had a respectable showing in the U.S. Championship. Hughes shared 1st with the famous blitz specialist Yaacov Norowitz, who repeated the same undefeated formula.

Besides the strong Armenian contingent, honorable mention goes to the Nigerian contingent at the Chicago led by IM Oladapo Adu (3.5/7) in the Open section; National Master Okechukwu Iwu (4/7) in the under-2300 and a number of players in the under-2100 including Sylvester Smarty (5.5/7). Kenneth Odeh started in the Open section, but after an unfortunate start he moved to the under-2100 section and ended on 2.5/5. Abiye Williams and Oluwole V Awoyemi also competed in the under-21s. Here is “Okey” Iwu’s game against Airapetian. 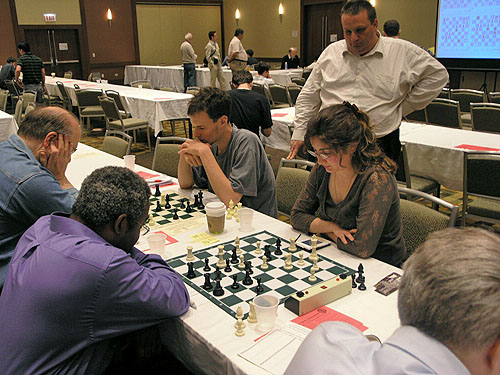 Nigeria’s Okechukwu Iwu battling Chouch Airapetian in an well-played game. IM Benjamin Finegold observes. This position on the board came out of a French and Iwu hit her with a tactical resource starting with 29…Bxe2!

Isaiah Gadson is another name to watch out for in the future. The St. Louis, Missouri native is a 13-year old scholastic player and is approaching the “Expert” ranking. He ended on 4.5/7 getting a free point in the last round against Sedrick Prude.

The Myth of Chess "Geekism"