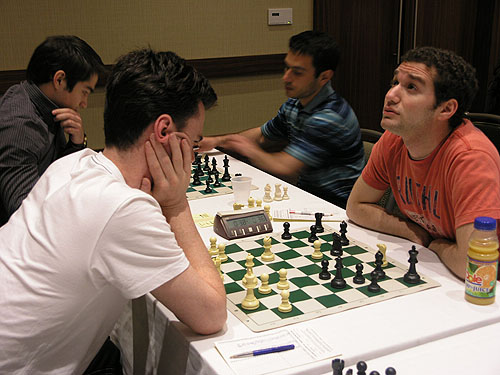 The 2009 Chicago Open has begun and a number of strong players are present. Top seed appears to be Armenia’s Gabriel Sargissian. He was spotted in St. Louis at the U.S. Championship where he was helping Varuzhan Akobian prepare. Playing on board #1, he won his first game against Mesgan Amanov, a Grandmaster from Turkmenistan.

There were a number of international players spotted including Loek van Wely of the Netherlands and other GMs such as Zviad Izora (Georgia), Darmen Sadvakasov (Kazakhstan) and Akobian (Armenia). On Friday night, I asked Akobian if he was playing and he said “maybe tomorrow.” Yury Shulman (Belarus) was embroiled in a tense battle with wily veteran Anatoly Lein. Newly-crowned U.S. Champion Hikaru Nakamura will not be playing in lieu of a European tour of tournaments.

The under-2300 section is chockful of strong players. There will be a few ringers in the crowd. Nigerian International Master Oladapo Adu will vie for top honors after coming off a win in the DC Class Championship, he’ll have added motivation. His friend and compatriot Okechukwu Iwu will represent one of the hopefuls at the lower half. U.S. Championship participant Tyler Hughes is also competing.