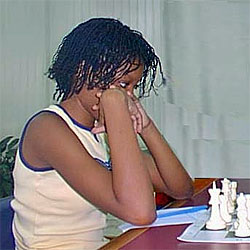 Deborah Richards stumbled in round 3 by losing to NM Russel Porter but recovered by winning in round 4 and upsetting Peter Myers in a critical round 5 encounter. She then held NM Brandon Wilson to a draw in round 6 to gain 4.5 points and win the tournament on the tiebreaker.

NM Peter Myers and Mikhail Solomon who also ended on 4.5 points came in second and third respectively, while pre-tournament favourites NM Porter and Brandon Wilson were tied for 4th with 4 points along with Mark Henry and Melisha Smith who also ended on 4 points.

The Intermediate Section was won by Kamaal Warren with 5/6 followed by Alethia Edwards 4.5/6 and Kadian McGlashan 4.5/6.

In the Amateur section, Janique Lee copped the first place trophy with a maximum 5/5 while in 2nd place was Jeremy Parchment 4/5
and Shemar Morrison who came in 3rd, also with 4/5.