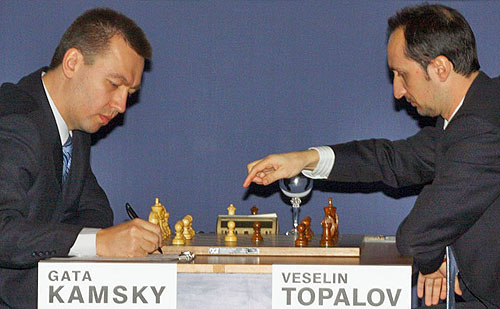 World Championship Challenger Veselin Topalov vaults back over 2800 (2812, +16) and there were a few changes in the top ten. World Champion Viswanathan Anand (2783, -8) lost a few from his substandard tournament right after winning the World Championship match against challenger Gata Kamsky. Magnus Carlsen (2770, -6) has held steady at #3. Vladimir Kramnik (2759) actually moved up four spots to #4 without playing a rated game. Vassily Ivanchuk who was dropped from #3 in the world is now at #12 (2746, -33). In terms of the women rankings, the recent World FIDE tournament will not change the order as Humpy Koneru (2612, -9) will regain a handful of points after winning the FIDE Women’s Grand Prix. She is still behind Judit Polgar (2693) who has not been very active since attending to her maternity responsibilities. A surging Hou Yifan (2590, +13) is now on the brink of breaking 2600… the Corus B and the Women’s Grand Prix will probably put her over. She would be close to challenging Humpy for the second spot. There is a lot of discussion whether she will challenge Polgar’s record for women. Former World Champion Antoaneta Stefanova lost a few points (2549, -8) and rising Georgian star Nana Dzagnidze gained 22 points after a strong tournment in Gibraltar.

On the Junior list, Carlsen lead is no surprise, but Sergey Karjakin (2721, +15) is gaining after a strong win at Corus in January. Fabiano Caruana (2649, +3) has continued his gradual ascent. Wang Hao (2696) hasn’t been active and something strange is happening here since he hasn’t played much since being benched in the last rounds of the Olympiad. His compatriot Li Chao (2643, +18) has gained but Philippines’ Wesley So (2643, +14) continues to gain and recently won the “Battle of the GMs” title in the Philippines. Hou Yifan appears on the overall juniors list for the first time at #20.

In terms of the girls list, Hou leads the pack and she is joined by four of her compatriots. The largest contingent would be from Russia, with a total of six girls in the top 20. Thus, China and Russia comprise of more than half of the girls on the list. Sabina-Francesca Foisor (2311, +5) has changed her federation from Romania to the USA apparently to attend school. She has played in a couple of tournaments with mediocre results. She was a victim in the controversial time scramble against Poland’s Monika Socko.

In the Africa Diaspora, there are a few changes. Pontus Carlsson (2496, -13) after a substandard showing at the Gibraltar Masters. Emory Tate is now at 2325, his lowest rating in many years. His drop is not due to lack of playing. Last year, he played an astounding 107 games and played 52 games thus far this year. Amon Simutowe (2486) will hopefully break 2500 very soon. He is touring the European circuit and recently scored well in Zagreb.