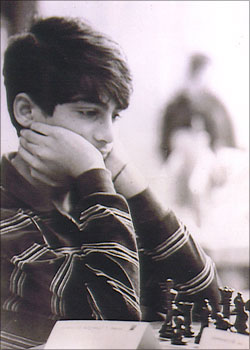 There is a very interesting indepth interview on World Champion Viswanathan Anand. It has been conducted by Sriram Srinivasan and Jaideep Unudurti and part one of the interview appeared on ChessBase. It details Anand’s beginning as never before. The intricate details of his boyhood endeavors and his subsequent rise give the reader an understanding of how this incredible talent was nurtured over the years.

Each and every player from a developing country should read this article since it proves that a player from meager beginnings can ascend to the highest levels if provided with motivation and community support. He has been an inspiration for the entire chess community and brings stability to the world crown with his balanced lifestyle and avoidance of stultifying politics.

Anand’s role model appeared to be IM Manuel Aaron who was India’s first master in the modern era. Of course India can boast of the exploits of Sultan Khan, but Anand is clearly the new chess icon of the modern era having won championships in every format: knockout, tournament and match. He is the only player in history to have accomplished this feat and has also won championships in rapidplay.

Anand has also a big influence of the subsequent wave of Indian GMs such as Krishnan Sasikiran, Pentala Harikrishna, Sandipan Chanda, Surya Ganguly and younger GMs such as Abhijeet Gupta, Geetha Gopal and Parimarjan Negi.

He makes from very interesting observations about the role of traditional training and his views on the application of the Soviet system.

Question: You have mentioned the Soviet Union. In retrospect your success seems incredible because the Soviets had a very comprehensive system in place for spotting and then training that talent, not only in chess but other sports as well. They also had world-beating players, so you could get practice partners. Apart from the Soviets there is you and there is Fischer. Fischer at least had the advantage of coming from the US, which is a rich country. You didn’t have that advantage either. Do you think you would be an even stronger player if you had gone through the rigorous training of the “Soviet school of chess”?

Answer: No, I believe that my days in the Tal Club [in Madras] was more important than getting training. Nowadays you see lots of kids like Magnus Carlsen who didn’t come through some training program. They came through playing chess on the Internet. Instead of going to a physical club they played 40 games a day on a server. You can see the results. You can see the tactical reflexes they have. Training does help; it has its role, not to demean it. I don’t think it’s necessary at that stage.

The interview was very inspiration and informative. He has set off a wave that we be felt in the coming years when India (along with China) will be at the top of the chess world. Also the effect will be felt in many developing federations who may be looking for inspiration to nurture talent in their countries.