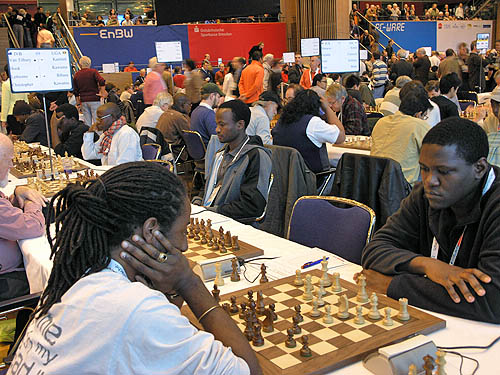 Kawuma performance sparkles, but not golden

Moses Kawuma and brother Steven came to the Olympiad with high hopes. Those hopes were dashed at the outset when visa troubles caused the Ugandan team to forfeit two boards for nearly the entire tournament. Harold Wanyama made an impassioned appeal to the organizing committee to send documentation for visa. Those answers were untimely. Shadrack Kantinti showed up in the 10th round and won his last two games.

Despite the constant forfeits, both Kawuma brothers made a valiant stand (as did Zambia) to hold the two boards. Moses ended the tournament on 9/10 which constituted the highest winning percentage in the open section. Martha Fierro scored 93.8% for Ecuador in the women’s section. This year, medals were awarded on the basis of performance rating which rewards players for the strength of their competition. In a sense, it is biased toward those playing on the strongest teams.

This criteria seems to be counter to the Olympiad spirit. You have an individual in Kawuma who scores 9/10 and gets no recognition for his performance. Peter Leko of Hungary scored 7.5/10 with a high performance of 2833. One may argue that awards should be given to those who scored well against the strongest field, but these results are not out of the ordinary for strong GMs. It is even possible to have a mediocre score and have a high performance rating. Peter Svidler had 4.5/9 and a 2651 performance.

Hypothetically, what about an unknown player from Maldives, Comoros or Equatorial Guinea who scores 11/11?? They get nothing and we may not remember their performance in coming years. However, most will remember Robert Gwaze’s 9/9 performance in the 2002 Bled Olympiad. These awards may represent a total celebration of chess and its universal appeal. Certainly Leko is a great player, but what residual benefits does chess get as a result of him winning that medal? Probably zero. What would the medal have done for Kawuma, Uganda, Africa and the universal appeal of chess? Probably quite a bit.

It is understood that the rule change was designed to prevent players from “stacking boards” or having their strongest player on the lower boards to win a medal, but even if a weaker federation has their boards in the right order, there is still no chance to win a medal based on performance since they will not play the strongest competition. In addition, board stacking in general doesn’t work. Alexander Morozevich of Russia is rated 2787 on board #4 and yet he could only muster 6/9.

It appears as if there should be separate awards for categories (as it is for team results), or to use another criteria. In the premier team tournament which prides itself on “Gens Uma Suna,” the current format does not appear to be inclusive of the effort and results of smaller federations.