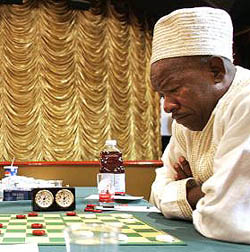 Almost everyone has sat down and played a casual game of checkers. However, few play the 8×8 version the way Grandmaster Ron ‘Suki’ King of Barbados plays it. A layman may not take this version serious and feel it is inferior to the 10×10 version known as “draughts.” Of course, we have learned about World Champion Baba Sy in this version and Bobby Fischer contemporary Archie Waters, who was a self-proclaimed draughts champion.

King, who won the checker World Championship, recently went to 1st World Mind Sports Games in Beijing, China and promptly bagged a silver medal behind arch nemesis Alexander Moiseyev, a U.S.-based Russian emigre. These two heavyweights have battled many times over the years including at the Mind Games with Moiseyev winning. Compared with boxing legend Muhammad Ali, he is known for his brash personality, trash-talking and flashy style.

In 2003, he told challenger Jack Francis in the middle of a “go as you please” match that he would never be a World Champion. Strong words, but fortunately these words rarely backfire on the 52-year old as he has won an unprecedented 11 championship matches including two wins over Georgiev. Here is an excerpt from the American Checker Federation website written by Hugh Devlin.

Ron King’s 2003 Three-Move World Title Match against Alex Moiseyev was his eleventh such match, a record that exceeds the achievements of any other player in the history of the game. Mr. King has travelled widely in promoting draughts, having contested matches in the USA, Barbados, Ireland, and England, and undertaking promotional tours in the Caribbean Islands, South Africa, and Ireland. 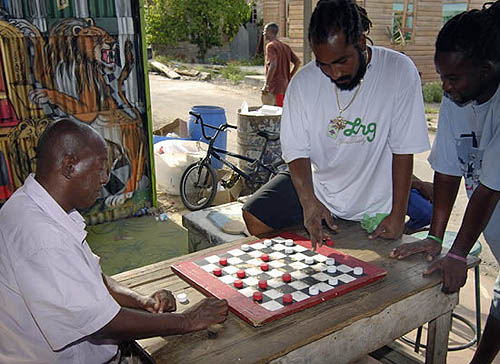 Playing against a street duo, GM Suki plays anybody anywhere.
That’s the mark of a champion.

Of course, those of us in chess can appreciate another mind sport competitor. King is a modern-day legend and appears to have taken on cult status in the checker world. He also holds a record for largest simul exhibition of 385 players… winning every single game! However, he also has some detractors due to his somewhat unflinching confidence and determination. Here is an interesting story from Richard Fortman, referree at a 1992 national championship. King was playing GM Elbert Lowder in the final round.

Elbert should have won. He had the tourney in the bag with only Ron King in the last round with a game up and all he needed was a draw heat with Ron King in 8th Round. It was a 3 on 3 position, 2 singles and a king apiece. Elbert said, “agreed draw,” but Ron replied, ” let’s play.” The position was a draw. They proceeded and Ron slow moved Elbert to death, causing him to step into a silly endgame trap. Elbert got really upset over Ron’s method of play, slapped the checkers off the board, and threatened to quit checkers! What a heart break for Elbert!”

Richard also commented that if Elbert had only referred the decision of the play to the referee, then the ref would also have called it a ‘draw’. The game position at the time was a draw and it was certainly an unfortunate way to end the game. No win is worth bitter feelings and poor sportsmanship.

This is another lesson that we often learn the hard way in chess!

For those who do not know Ron “Suki” King, let it be known to the checker/draughts world that his accomplishments are not overlooked in the chess community and he is to be commended for bringing honor to his sport as well as his home island of Barbados. Congratulations! 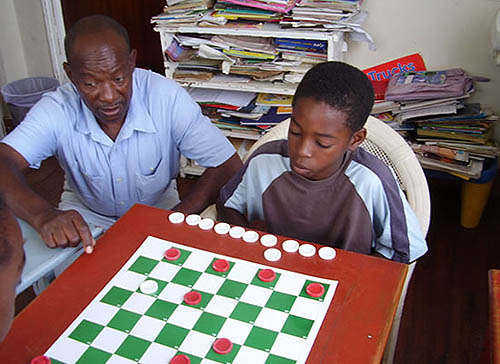 Passing on the art!

WCC 2008: Anand powers ahead of Kramnik!