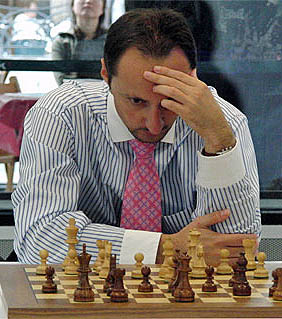 There was a lot of suspense leading up to the October 2008 rating list with many suspecting that Norwegian phenom Magnus Carlsen would vault to the number one spot and set an age record for the top rating. That moment would be short-lived. Carlsen faltered at the end of the Bilboa tournament and dropped from his temporary perch atop the list. It then appeared as if Vassily Ivanchuk would take the mantle, but when all was said and done, Veselin Topalov (pictured right) reclaimed his number one position for the first time in two years (2791, +14). Topalov gained the spot by winning the Final Masters Bilbao tournaments. Alexander Morozevich snuck in the #2 spot (2787, -1) despite losing a point. The Russian is followed by Ivanchuk (2786, +5) at #3 and Carlsen (2786, +11) at #4. Viswanathan Anand has dropped to #5 after an abysmal performance in Bilboa (2783, -15).

Vladimir Kramnik (2772, -16) continues to fall from grace heading into his match with Anand. Levon Aronian has rebounded and is inching toward the top after gaining a handsome 20 points (2757, +20) after winning the FIDE Grand Prix and finishing 50% in a strong Bilboa Masters. Perhaps one of the biggest stories of this rating list is Hikaru Nakamura’s eclipse of the 2700 barrier (2704, +7). For many years there has been question of whether he can reach such a level. His talent was never in question, but he had a penchant for playing dubious openings and experimenting in crucial situations. He has certainly rounded out his play in order to correct his opening weaknesses. He has since moved to Canada and plans to play in the European circuit.

In the categorical lists, Judit Polgar remains at the top of the women’s chart and some are calling for a “unifier” tournament featuring Polgar and another female challenger. That would have to be women’s champion Alexandra Kosteniuk (2525), but it is perhaps safe to say that she is far stronger than any female chess player. However, Humpy Koneru (2618, -4) is #2 and the rising Hou Yifan (2578, +1) represent the future. Hou is perhaps one who could challenge Polgar given her age, talent and tenacity.

In the junior list, Magnus Carlsen (2786, +11) is at a comfortable distance from Sergey Karjakin (2730, +3), but the rising star appears to be France’s Maxime Vachier-Lagrave (2716, +35), who is now the nation’s #1 player. As mentioned, Wang Hao (2696) is rising and compatriot Li Chao (2622) is also improving rapidly. These two juniors will be a part of the Chinese Olympiad team which hopes to win their first gold medal.