AFTER four rounds of action in the CGI/BOA National Chess Championship International Master Kevin Denny, and defending champion Fide Master Delisle Warner have shown their class as they remained the only two unbeaten players in the competition. 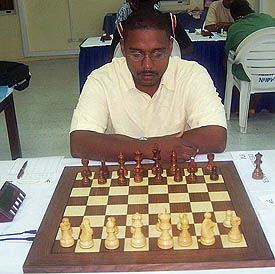 National Champion Warner has played brilliantly thus far, and seems determined to retain his title. In the first round a very confident Warner defeated the talented Junior Shamel Howell in a French Exchange Variation. In round 2 he inflicted a crushing defeat on Dwayne Gilkes and in round 3, against Alex Jackman, using the French Defence again, he engineered a fine victory after obtaining a slight advantage going into the endgame. In round 4 all the pundits were expecting Fide Master Delisle Warner to receive a stiff challenge from the English Speaking Caribbeans top junior, Martyn DelCastilho. However, Warner was in brutal form with the white pieces and did not allow his opponent much counter play. His young adversary soon had to concede defeat. This leaves Warner on four points in joint first place.

Also on four points is International Master Kevin Denny who has also been in fine form. He easily defeated Michael Barker, Othniel Harewood and Shamel Howell. His only real test came in round 2 when he faced Justin Blackman, the Barbados Open Junior Champion, who has also been playing exceptionally well. Denny who drew with Blackman in the recently concluded Trinidad Chess Carnival, was determined to show his dominance and not concede another draw to his young opponent. Denny chose the sharp Kings Indian Defence and but had to work hard to get the full point in a game that provided winning chances for both sides. The fans are already predicting fireworks when Denny and Warner meet in round 7.

Closely following the front runners are Justin Blackman and Martyn DelCastilho on 3 points. Next in line on 2 1/2 points are the veteran Michael Barker and the tournament’s youngest player, 15 year old Alex Jackman of Lester Vaughn. Veteran Othniel Harewood and Akeem Cox have 11/2 points each.

Fide master Dr. Philip Corbin has found the going really tough so far. Blackman, Howell and Jackman all juniors, have defeated him, leaving him on 1 point which he gained in his only victory so far against Othniel Harewood. Shamel Howell also has 1 point, and Boris Thompson and Dwayne Gilkes are yet to open their account.