“Drum Major” is associated with a leader of a band. Their job is to keep the pace and to serve as a model for the band unit. In The Chess Drum community, Drum Major means something different. Certainly the term still connotes those who serve as models, but more precisely it is a label for those players of African descent who have reached master level and serve as models of chess excellence both near and far. Drum Majors dot the chess landscape and they filter into tournaments in increasing numbers. One such tournament was the recently-ended World Open. 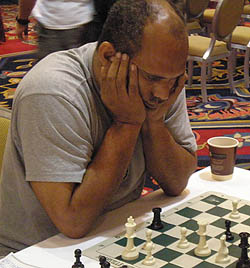 IM Emory Tate (pictured left), one of the most active players of African descent in the world, headlined the number of players trying to make an impact at America’s top tournament. The World Open has traditionally been a tournament that Drum Majors have excelled (without exception).

Apart from Tate, NM Glenn Bady (USA) tried his hand in the Open section and started with a win over IM Bryan Smith. FM William Morrison and FM Norman “Pete” Rogers were battling in the under-2400 section. Also in the under-2400 was the international contingent including players such as IM Oladapo Adu (Nigeria), FM Jorge Renteriá (Columbia), FM Farai Mandizha (Zimbabwe), NM Chikwere Onyekwere (Nigeria) and NM Okechukwu Iwu (Nigeria).

The going was rough for most of the way for the Drum Majors. Tate was never able to get a streak going after losing two out of first three and ended on 4-5. This result is a rarity for Tate at World Open, a place where he seems to produce at least one brilliancy a year. He had a very exciting game against IM Marani Venkatesh of India, but the game was drawn. Bady, who lost to Tate, scored 3.5/9 in the Open section. 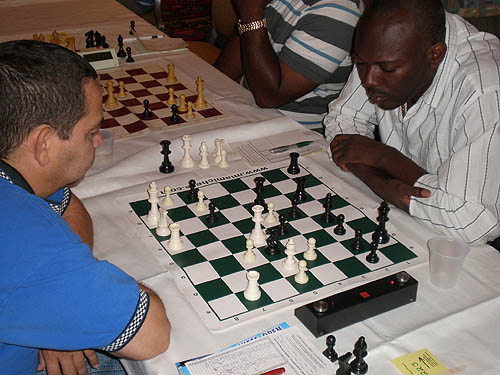 In the under-2400, Rogers scored a solid 6/9 including wins over FM Robby Adamson and WIM Sai Meera of India. Renteriá played five, 45-minute rapids including a crush of IM Blas Lugo. The Columbian from Chocó ended on 6/9 and mentioned that he was playing in a blitz tournament in New York’s Manhattan Park before returning to Bogota. (Note: I interviewed him at the HB Global back in 2005.) 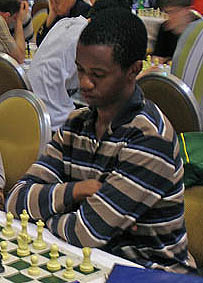 Mandizha (pictured right), is currently residing in New York and is developing a reputation as a blitz beast. He defeated Rogers, but then lost two consecutive games to put him out of contention. The Zimbabwean ended on 5.5/9. Adu played a couple of nice games in earning his 5.5/9 score. He beat WGM Arthie Ramaswamy in a dynamic Sicilian after earlier losing to her compatriot WGM Eesha Karavade.

Adu later beat IM-elect Raymond Kaufman in a nice kingside attack. He told The Chess Drum he would try to earn a spot on the Nigerian Olympiad team. Two other Nigerians were playing in the under-2400. Iwu scored a respectable 5/9 while Onyekwere scored a disappointing 3/6. He stated that he simply was not in form. Morrison couldn’t gather any consistency during the tournament (finished even on 4.5/9), but he played a brutal blitz match with Onyekwere. More on that later! 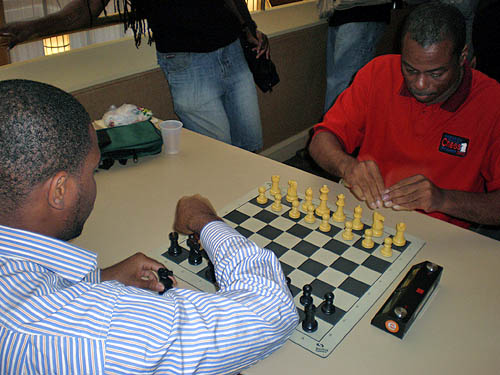 All photos by Daaim Shabazz.