The Indian contigent is making a strong showing at the World Open and have made an impact for the last few years. There are about 14-15 players in the delegation and they will travel to Canada to play in the Canadian Open after the World Open ends. The delegation includes: 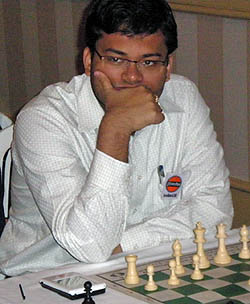 I had a very nice conversation with Vijay Kumar, the famous videojournalist who follows Viswanathan Anand around the world covering his events. I had been an admirer of his work on ChessBase and had seen many of his interviews of the World Champion. Vijay is producer of four chess television shows in India and was formerly in the Sports Ministry of India. He had just finished a brief interview with Parimarjan Negi when I walked up and introduced myself. Vijay is a very affable person and talked passionately about his travels with Mr. Viswanathan to Mexico, Argentina, Dubai, Tripoli, Turin, and Calvia.

What brought him to Philly? Was he covering the Indian contingent? He was covering the contingent, but his focus was Negi. He said that after Viswanathan’s career starts to tail off, he needs another figure and he believes that Negi will go far. Negi won the Philadelphia International and is doing well in the World Open with two rounds remaining.

I chatted with Negi who was very polite and well-mannered. He was professionally-dressed with his Tata Corporation jacket on. Many of the Indian players were wearing the logos of their sponsors. Ganguly and Kunte were wearing “Indian Oil” and G.N. Gopal was also sporting a logo. I introduced myself to Negi and told him I had interviewed many Indian players and he told me he had visited the site. It was his first time to the U.S., but told me that he did not travel with the rest of the Indian delegation. He apparently is traveling on his own schedule. 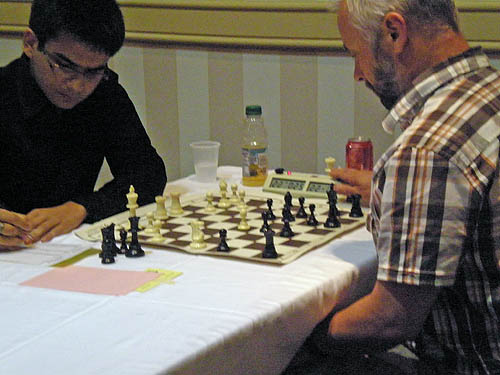 I told both Negi and Vijay that it was an honor to have the Indian delegation here because it adds to the quality of play and there is more fighting chess. In the U.S. the same players are fighting in every tournament and it becomes a routine. I remember when China came to the National Open in 2001. It was instructive to see the camaraderie and the discipline of the Chinese players. 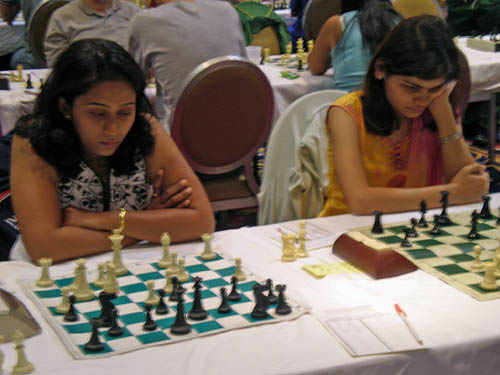 With the Indians, I notice the same camaraderie/discipline and also an impact they have on the Indian players residing in the U.S. The men are neatly-dressed and the woman are looking regal in their saris! Let us hope that Indian brings a team for years to come!