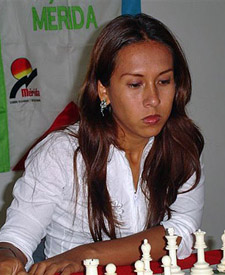 The ongoing subzonal in Merida, Venezuela has at stake four qualifying spots to the 2009 Central American & Caribbean Zonal Championships. GM Eduarado Iturrizaga will head the field featuring four other Venezuelans, three players from Trinidad and two players each from Puerto Rico and Barbados.

The surprising omission was that no players were sent from Jamaica, one of the strongest nations in the Caribbean. Cuba is also not taking part in the festivities, but will no doubt be a part of the Zonals. The women’s competition is dominated by seven Venezuelans(!), two Ecuadorans and one player from Trinidad. The player pictured on the right is Rocio Vasquez-Ramirez, a Women’s International Master from Ecuador. Photo by Allan Herbert.