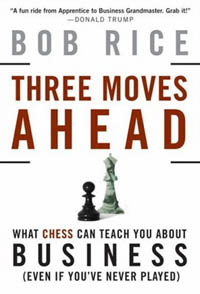 I just finished a book titled, “Three Moves Ahead: What Chess Can Teach You About Business.” The book was written by Bob Rice, an entrepreneur and partner in financial management group. He makes an attempt to use chess analogies to teach business strategies, but I found his analysis of business cases to be a bit awkward at times. Rice discussed practically every contemporary business case imaginable in 10 chapters, less than 200 pages and somehow related it to a variety of chess themes. I found some of the analogies to be interesting such as time control, strong squares, sac the exchange but some of his analogies appeared to be strained.

I must admit that he reminded me of some interesting cases in history including the automobile wars, browser wars, dot-com era and failed mergers like AOL Time-Warner and IBM/Microsoft/Apple wars. He discussed how ESPN had battled with Sports Illustrated because they established a “strong square” and began to expand in the market. He cited Aron Nimzovitch’s theory of dominating a game through a strong square and expanding an advantage… it was an interesting connection. 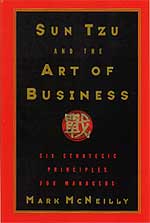 There are other books on this marriage including one written by Garry Kasparov titled, “How Life Imitates Chess: Making the Right Moves, from the Board to the Boardroom.” There is a book written by Mark McNeilly titled, “Sun Tzu and the Art of Business.” I believe this is one better suited for understanding business from a strategic view.

I believe if Rice had not covered so many cases and dealt with concepts in greater detail, then the book would have been more effective. He stated that the book could be understood by non-chessplayers, but I found that some parts would be gibberish to someone who doesn’t know a rook from a knight. His list of references is also very skimpy.

Of course many businesses use chess themes as I learned in graduate school. Marketing strategists Al Ries and Jack Trout wrote on Karl von Clausewitz’ idea that you have to have a 3:1 advantage to direct a front assault against an enemy position. Certainly when we play chess we understand the meaning of a pawn storm and such principles may apply. There are others such as diversionary tactics used a lot in business war such as Hewlett-Packard’s demolition of its competition. There is enough proof to show a connection between chess/warfare/business and there is no doubt that more books will follow.

'Tireless Tate' on the beaten path!