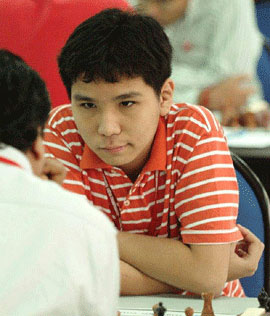 The Philippines has had a tumultuous time rebuilding their chess community after vicious infighting. Young Filipino GMs Mark Paragua and Wesley So certainly are bright spots. More on So later.

I remember seeing Paragua (pa-ra-gua) playing at the 2000 Chicago Open as a 16-year old upstart. He was tactically sharp and gave an impressive exhibition of his blitz skills. I asked him how old he was. He said humbly, “Sixteen.”

After earning the GM title, he had to toil in a contentious chess environment in the Philippines, but emerged as the #1 player. Paragua’s progress seemed sluggish and when I saw him at last year’s World Open he was clearly out of form (despite a stunning 7-move mate against IM Jay Bonin). I actually interviewed him and he sounded unsure of what his future would bring.

While Paragua revamps (now at 2537 FIDE), a new player has surfaced… and his name is Wesley So (2540). So is the 7th youngest player ever to earn the GM title and is now the #1 Filipino. According to a ChessBase article last year, So is known for his tactical ingenuity and sacrifices pieces at will.

The Philippines has five Grandmasters with the veteran Eugenio Torre (2519) being the first and most well-known. Rogelio Antonio, Jr. (2529) has also been the nation’s top player (and 2nd GM) and Darwin Laylo (2496) is the other player from the GM quintet. (Correction: Buenaventura Villamayor and Nelson Mariano II are also GMs but as of April 15th, do not appear on the federation list.)

With the latest FIDE rating list out, So is on 2540 which puts him just outside the top 20 juniors. It appears as if Asian juniors are rising fast… China, India, Vietnam and now the Philippines. So will add flavor to an already interesting cast of rising young stars.