Interesting story on ChessBase! Former World Champion Garry Kasparov is reported to have played shogi (??)with a Japanese master. Shogi is very much like chess in that many of pieces are the same. The difference is that the tiles are invertible so if you capture an opponent’s piece, you can place it back on the board.

Incidentally, IM Larry Kaufman is a 5-dan shogi player and his son Raymond is a 3-dan player. Larry is much more famous in shogi than in chess and actually credits shogi with a renewed interest in chess. Kaufman is the strongest western shogi player in the world… or near the very top.

My initial exposure to shogi first came when Maurice Ashley told me he played Yoshiru Habu at the Chicago Open and showed the game to some onlookers. Years later, I was fortunate enough to interview Habu and it is one of the most popular recordings on The Chess Drum. He currently plays at IM strength and is extremely humble. His shogi accomplishments exceed both Kasparov’s and Fischer’s. 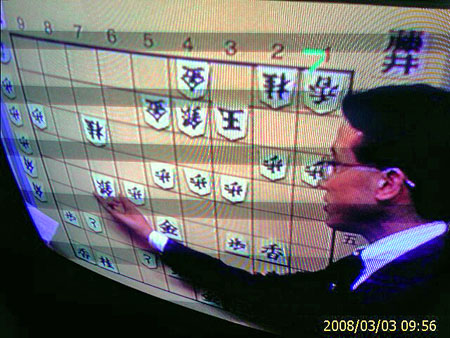 When in China, I turned on the television only to find a shogi tournament in progress. The ritual is very intriguing and I watch the various matches take place. The players had immense respect for the game and it showed. I’m sticking with international chess, but shogi and go are interesting Japanese chess variants.