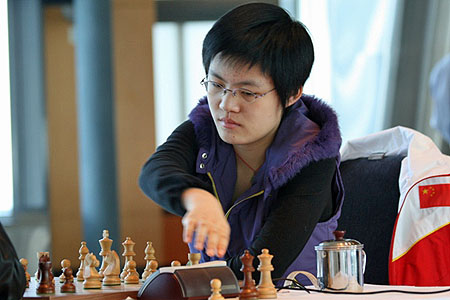 Chalk up another Chinese victory! Fourteen-year old Hou Yifan bested the strong field at the Atatürk International Women Masters Chess Tournament sponsored by Türkiye ?? Bankasi. Hou scored an undefeated 7-1 and clinched a tie for first with a round to spare. Over the past year, she has clearly rounded into Grandmaster form and it is a matter of time until she earns the full “GM” title. Both Pia Cramling (who’s been a GM forever) and Zhu Chen were the two Grandmasters in the field. Hou’s was joined by teammate WGM Zhao Xue and a slew of IMs including 17-year old Harika Dronavali of rising India. 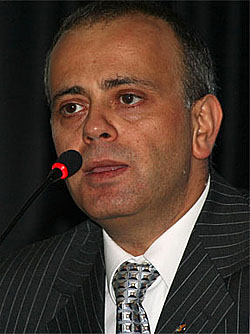 The tournament was a novel idea and is a welcome addition to the variety of theme tournaments held… often dominated by a handful of top players. Turkey’s Chess Federation President Ali Nihat Yazici (right) organized the tournament and stated in the regulations that, “The tournament will be organised every year traditionally, and only top 20 women by a logical invitation will be accepted in Türkiye ?? Bankasi – Atatürk International Women Masters Chess Tournament.” Perhaps we will never see any of the Polgars play in the tournament, but this appears to be the makings of a great tradition.

There are often questions about women chess players and many point to GM Judit Polgar as the standard bearer, but Nihat’s plan to aggressively improve conditions for women’s chess is a noble one. The former running mate of Bessel Kok had other pronouncements such as the largest federation in Europe (?) and one million members. There is also the notion that Turkish women’s team will vie for Olympiad gold in 2012. Quite ambitious membership plans, however a gold in 2012 (four years from now) is a bit unrealistic unless China, India, Russia and the Ukraine stop producing female talent. God willing, I plan to be at the 2012 Olympiad in the beautiful country of Turkey and will see how far the prediction gets. Nevertheless, Yazici has created incredible momentum and has proven to be an adept organizer. All the best! 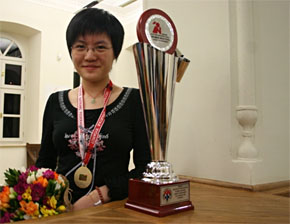