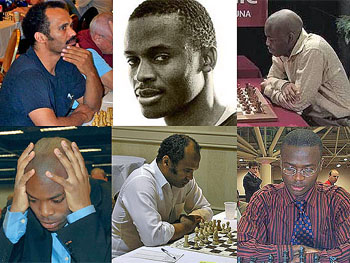 The Málaga Open kicked off in Spain and three players certain to add excitement to the event are IM Emory Tate (USA), GM Pontus Carlsson (Sweden) and GM-elect Amon Simutowe (Zambia). The three will join a strong field with three very different objectives. Tate is looking for a GM norm, Carlsson is looking forward to a 2600 ELO while Simtuowe is attempting to close the book on his GM title by gaining ELO points toward 2500.

Tate will bring his swashbuckling style to the field and his games will no doubt attract interest. Carlsson has been in top form lately and has played more aggressively in recent tournaments with good results. His performance in Corus “C” was solid and he told The Chess Drum in an interview that he hopes to raise his level. Simutowe just arrived from Cappelle La Grande in France where he put in a 6½-2½ performance. He will arrive in Spain with an idea of playing good chess and from there he will compete in Reykjavik, Iceland. Let’s root for the Drum Majors!