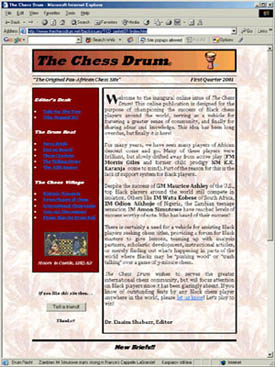 It all started with the page on the right. A crude banner, a few news stories, ugly diagrams, BUT a lot of good intentions. Seven years later, The Chess Drum has grown… and grown… and grown. Now at 6000 pages, the site has become a recognizable member of the chess community and provides an example of how universal chess has become.

Today, chess players have a wide variety of resources from which they can seek enjoyment and diversion. Websites happen to be the most important providers of information in the chess world and there are a many to choose from. This was not the case 20 years ago when the Chess Informant was king! The type of information about chess news was limited to national magazines which were very difficult to maintain and support financially. When the Internet era emerged, the chess world was treated to a virtual smorgasbord of content.

In 2001, The Chess Drum became a part of this wave. Back in the pre-Internet days, it was very difficult to find information on current chess news. Chess organizations essentially did a very poor job in marketing the game to the world community and it was stigmatized as a game for rich, white, male geniuses. With this reputation, it became hard for chess to gain broad appeal with people of other demographics. However, my research suggested that there was a big demand for such information… particularly among Blacks around the world.

Slowly, but surely, chess has begun to gain incredible momentum in far-flung places. With regard to reaching a wide spectrum of people, the Internet has made the game accessible to a wider audience. From this spirit, The Chess Drum was born and the beat of the drum began. With the focus of the site remaining of players of African descent, the site still remains popular worldwide and hopes to continue to provide chess services to the world.

The Chess Drum… A Seven-Year Journey