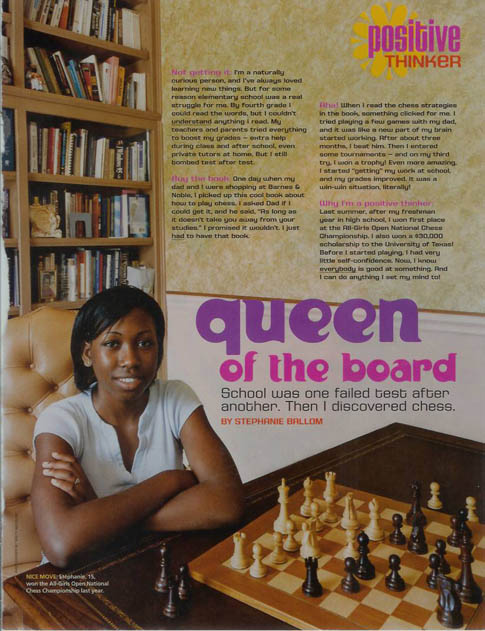 The above article is not from NEW IN CHESS, but Guideposts Sweet 16 magazine. More on the NEW IN CHESS later. This article was titled, “Queen of the Board” and written by Lisa Freeman. It was about Stephanie Ballom who (at the time) had just won the 1st All-Girls National Championship in Chicago, Illinois. The article written stated that she had troubles in school until she picked up a book on how to play chess in the bookstore. She stated when she read the strategies in the chess book, something clicked and her grades started to improve. (see article)

Stephanie Ballom was a standout at Mansfield Highschool in Mansfield, Texas and won a $30,000 scholarhip to University of Texas-Dallas. Despite winning this opportunity, she decided to attend Texas Tech University. Now in her 3rd year, she is able to keep chess as one of her activities since GM Susan Polgar took a position there to run SPICE, the Susan Polgar Insititute for Chess Excellence.

Stephanie is certainly helping out with the SPICE program and was apparently part of the host committee for the strong Reshevsky Memorial organized by SPICE. Stephanie appeared in the NEW IN CHESS magazine (2007 #8, page 92). I was surprised to see her in the picture as she seemed surprised when I informed her about a month back. Perhaps her study of Russian will help her if SPICE continues to organize strong tournaments.

All the best Stephanie!