In a recent ChessBase.com article, Bobby Fischer’s last movie was said to be “The American Gangster.” That is unfortunate because that is not a favorable last impression of Black people. However, he did have some interesting interaction with Black chess players. 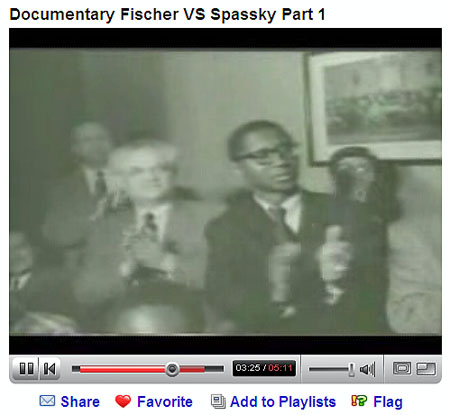 Archie Waters at a Fischer analysis session when the young GM played the brilliant queen sacrifice… not the Bryne game, but another!

Waters befriended the teen-age Fischer in Brooklyn in the 1950s and accompanied the chess genius to Iceland during his landmark world title match against Russian Boris Spassky in 1972. Waters played ping-pong with Fischer between his matches with Spassky. Born in Brooklyn, he attended Columbia University and later became the first black member of the prestigious Marshall Chess Club of New York.

Here was an interesting story taken from Tim Krabbe’s site concerning Waters’ meeting with Ton Sijbrands, the 1972 Draughts World Champion. Fischer was apparently interested in draughts (10×10 checkers) and Waters was supposed to introduce the two.

When Sijbrands became World Champion for the first time, in 1972, he won a trip to Reykjavik, to see the World Chess Championship match between Spassky and Fischer. I hoped to find an opportunity in him to get to Fischer. Word was that Fischer was interested in draughts, and there was a little black guy from New York in his entourage, Archie Waters, who was said to be his ping pong partner, and a very strong draughts player. I could see myself and Archie Waters, envoys paving the way for a historic meeting. But when Sijbrands and Waters got together, it turned out Waters had never heard of him and also, he thought he was the World Champion—in another variant of the game. It was a moving sight to see my World Champion and this other world champion explaining their rules to each other.

Fischer also befriended Walter Harris, the first Black player to make U.S. National Master. In an interview I conducted with Harris in 2005, he shared a conversation he had with Bobby Fischer in which Fischer told him that he had some talent and should work harder at his game. I asked Harris the other day if he had any stories to share and he said their conversations were very general but added,

I will always remember him as the great player that he was and what he gave to the game. I too will not dwell on the sadder aspects of his life.

Walter Harris, a Fischer contemporary on the March 1964 cover of Chess Life.

I also remember an awkward situation with Fischer had with Atlanta Journalist and U.S. Expert, William Scott III. According to Michael Bacon, this is what happened at the 1972 Church’s Fried Chicken tournament in San Antonio, Texas:

There was a crowd of people surrounding Bobby, all asking for his autograph. Mr. Scott, tall and distinguished, among them. Mr. Scott thrust a program at Bobby and asked him to sign it. Bobby shot Mr. Scott a look and took the program. As Bobby was signing, Mr. Scott said, “I played in the U.S. Open in 1956, I believe, but I may be wrong-you’ll have to look it up… and finished ahead of you.” It was an innocent remark made to fill time and Mr. Scott meant nothing by it, but Bobby didn’t see it that way. He shot a look at Mr. Scott as he returned the signed program and said, “Oh yeah. Well what’s your rating now?” Mr. Scott, taken aback, mumbled something about being “only an expert.” Bobby said, “Um huh,” and turned to walk away. Link

I have been told by different people (including a player in Japan) that Fischer was aware and a visitor of The Chess Drum, but there is no confirmed proof of this. Although I can check the traffic from Iceland and Japan rather easily, there is no way to trace visits to specific people. He never sent me an e-mail although I had intended to interview him. I did post on his website once and informed him of The Chess Drum.