A new version of “Chess Crackers” is up. In the bimonthly features, four positions are presented. In the future, I will present some selections from non-Master games. Although the puzzles from Masters emanate from better games, the tactical positions arising from any game can be instructive. I did include one this month of FM (now IM) Emory Tate… one of his gems. 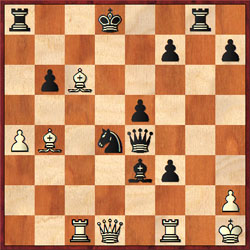 Here are the other Chess Crackers!

Posted in Tactics Lab | No Comments