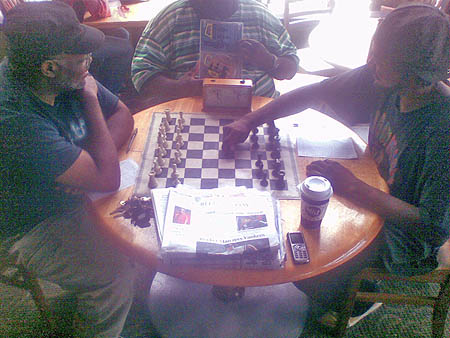 For years, Buffalo’s Lionel Davis has touted his “ultramodern” theory and claims that it has a precedent with the play of Bobby Fischer. Chess players around the world understand the contributions that Fischer has made to chess including a variant called, “Fischer Random” or “Chess 960” where the first rank of the pieces are positioned randomly.

Fischer claims that the traditional form of chess has been “played out” and corrupted by pre-arranged games and matches. While Fischer has few supporters in his fixed matches theory, there are many who agree that chess has been affected by the strength of computers and rote memorization. Lionel ‘the Ultramodernist’ Davis may be one of them.

In addition to coming up with novel ways of playing the opening, he has now examined the idea of introducing a “black moves first” variant.  This would have the effect of giving black a “perceived advantage” of the first move. He states confidently,

“We now move to challenge this ideology that “white has the advantage of the first move” therefore we as African people” strip ” our Caucasian counterparts of the luxury of moving first and force them to play real chess on a level board! One can even go so far as to say Black is more equal than previously held opinion might have suggested using past chess ideology!”

However, the colors may change, but the theory of the “first mover advantage” (in a literal sense) is still present. Giving black the first move does little? unless we are only concerned about the color of the pieces. Black moving first does change the orientation of the board, but it does nothing to change the first-mover advantage theory.

Davis has also done a study of Fischer’s games and is quite an admirer of Hikaru Nakamura’s “ultramodern” play. He marveled when Nakamura used what Davis calls the “ultra-Pirc” (1.e4 d6 2.d4 f5!?). Nakamura stated that it is an idea his got from his father, FM Sunil Weeramantry, an inveterate Pirc player. Davis also mentions Alexander Morozevich as one who uses ultramodern theory with great effect.

This debate has surfaced on blogs, discussion boards and Internet chess servers. Chess has only seen a limited number of possibilities and perhaps even the top players do not understand all of its intricacies. Morozevich was quoted in a New in Chess interview as saying, “Kasparov doesn’t understand a damned thing about chess.” What Morozevich was referring to was the breadth of ideas possible in chess. Have we seen all the ideas and manuevers in chess. Davis doesn’t believe so.

“I utilized an Ultramodern maneuver that is unique to our science? Na6-c7-e6-g5 this is the” transboard action of the knight.” This idea befuddles traditional theorist, so it was fairly easy to be successful in that match. However what I did not know and would soon discover when I got ChessBase 9 is that Moro has been studying theses ideas since 2001 as well as other top Russian players. I was going through some Russian tourneys in ChessBase and came across the Russian-ch. Superfinal 2005 (S. Volkov-A. Morozevich) when much to my surprise I see the ultramodern transboard maneuver Na6-g5 !”

What Davis seems to be saying is that there is an alternate way of approaching chess and there are strategic ideas that are unique. Bernard Parham’s “Matrix System” received more scrutiny when Nakamura played 1.e4 e5 2.Qh5 in an important game against Krishnan Sasikiran.  Although he lost the game, he got a good position and the theory was revisited. The consensus was that the move was playable, but not at high levels of competition.

Why has chess taken a linear route of “white is better?” Does white really have the advantage with the first move? Statistics show that the player moving first wins about 55% of all games. The question one would ask is whether that is attributable to the first move or whether we have been psychologically conditioned to believe in “first mover advantage.”

So, are we more encouraged to win with white than the player who moves second because of this belief? Davis played an “ultra” game with Tony Kimbrough. After black 1.e5, Fritz does give black a slight advantage!

What would happen if black moved first in chess? What would happen if the color moving first was chosen at random? Would it make a difference in how players perceive the game? With all the variants being conceived, it appears as if the Fischer Random will have a future. Players are looking for ways to make the game more interesting.  It’s strange that no one has discussed white’s first mover advantage in this variant. Does the first-mover advantage change given which of the 960 positions occur? Interesting.