Zambia’s FM Nase Lungu had a stellar tournament at the 9th All-Africa Games. He is a veteran who has represented his country in Olympiad tournaments for almost 20 years. In the position below, Lungu holds five menacing pawns against a lone rook. We are taught that five pawns equals a rook, but in the endings, pawns far outweigh the rook. Below we have a practical example from the 1990 Olympiad in Novi Sad (then Yugoslavia) between Lungu and Martin Marder-Riveda of Honduras. 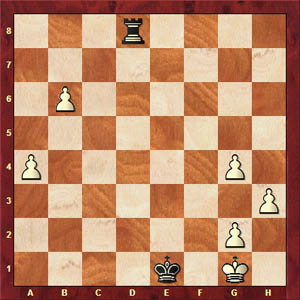 After black’s 52…Kxe1, Lungu’s pawns steamrolled black’s rook without the aid of the king.

However, in the position below, we will make the contest a bit fairer. This is an interesting study from the Batsford Chess Ending encyclopedia. Despite the above example, the rook can often show off its amazing range and versatility against seemingly insurmountable odds. This ending is very practical and often times the rook finds itself having to chase down multiple pawns after a pawn race. 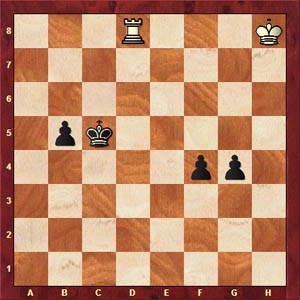 Obviously, White is on the defensive. Black is threatening 1…g3 after which it would be impossible to deal with all the pawns – or indeed 1…f3. So White’s move must be a choice between 1.Rf8 and 1.Rg8, but which one?  Work it out!

White to move and draw!

9th All-Africa Games: Give us your Reflections!