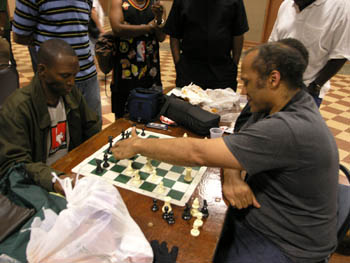 Emory Tate (right) showing me his game against Salvijus Bercys, a 27-move gem.

Emory Tate approached me and asked, “Is The Chess Drum open for business?” He then demonstrated the game with his usual flair and spell-binding analysis. There was a small crowd, but I hear he did the game earlier to a much larger crowd. It was gracious of him to offer this opportunity… and he allowed me to tape it. The Tate-Bercys game includes the commentary he gave.