I don’t usually show too many of my games on The Chess Drum, but this one had a unique lesson. I remember a book by GM John Nunn called Secrets of Pawnless Endings. It had some amazing tactics in pieceless endings. There is nothing worse than missing a nice tactic to finish a game. I had two such positions at the 2007 World Open… one a queen sacrifice leading to mate and the other… well, read on.

I still won both games, but one of the positions was unbelievable. In this game against Expert Matt Conant, my knights galloped about board trampling my opponent’s two bishops in an open position. Doesn’t that defy what we learned about knights vs. bishops? Maybe, maybe not.

In the ending I ran a queenside majority through and forced my opponent to sacrifice a bishop for the pawn, but still I had to figure a way to promote the pawn without allowing a draw. In the position below, I nearly fell into a trap. I had played 63.Nfd6 to play f4-f5. When my opponent played 63…Bb8, I saw 64.f4? and 64…f5+! drawing since 65.Nxf5 Bxf4! leaves white with only two knights. 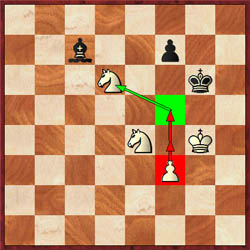 Once I carefully won black’s last pawn and ushered my pawn up the board, I arrived at the following position  as a small crowd had gathered. I was getting tired as the game was on the 93rd move, so I played 93.Kf7 Kh7 94.Ke8 with the idea of escorting the pawn into the queening endzone. However, look at the position again. I missed a way to end the game with a problem like mating solution. 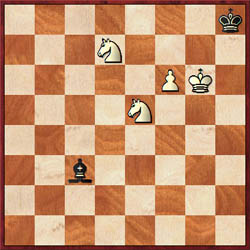 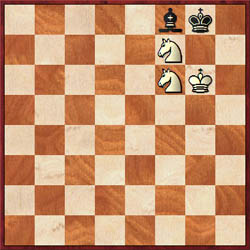 Oh my goodness, a two-knight mate with no other pieces or pawns on the board. How many can say they have done that?? Well… I STILL cannot say it. Nevertheless I learned a great deal from this game and it shows that theory can sometimes be overturned. Knights are sometimes better than bishops even in OPEN positions. See knights vs. bishops battle here.

I also had an interesting opposite-colored bishop ending. Anyone else have a tactical ending from the World Open (win or lose)? IM Amon Simutowe had one against FM Ray Robson. See that game here.