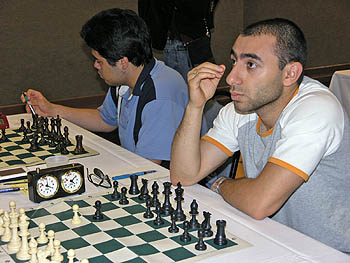 Hikaru Nakamura and Varuzhan Akobian pawn off in the 7th round. Both games (vs. Alexander Stripunsky and Leonid Yudasin respectively) were drawn. Photo by Daaim Shabazz.

Going into the last round of the World Open, there is a five-way tie for 1st with Hikaru Nakamura, Leonid Yudasin, Varuzhan Akobian, Alexander Stripunsky and Sandipan Chanda on 5½-1½. There is a massive seven-way tie for 2nd place and going into the last two rounds (5-2) so the tournament is still wide open. Chanda has won three games in a row and will no doubt get a stiff test in round eight. Nakamura drew with Akobian and Stripunsky and in the latter game some very interesting tactics occurred. 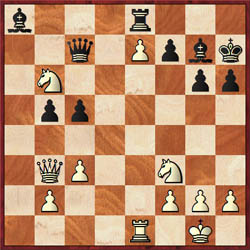 On another note, I did an audio interview with GM Mark Paragua of the Philippines and got an interesting game from IM Emory Tate against IM Salvijus Bercys. It was another creative gem with a lot of tactical subtleties. I’ll provide the game with the analysis that he gave.