The 2007 World Open will heat up today when the 3-day section will begin at 11:00am. GM Hikaru Nakamura will be the center of attention as he puts he blitz skills on display in five 45-minute games. Nakamura told The Chess Drum that he has played in the quick schedule before. For those who have never seen a time scramble during these time controls, they are fast, furious, intense and very noisy. Clock-banging is definitely in full effect! The grueling schedule is the favorite of blitz aficionados, for those with restricted schedules and for those who decide to re-enter after a poor showing in the other schedules. In other action, the 7-day and 5-day schedules will play their 5th games on tonight and everyone will merge on tomorrow. 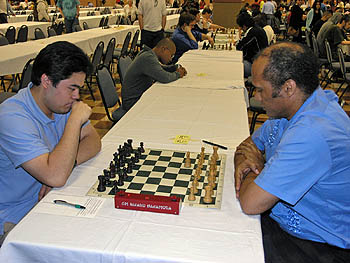 Nakamura and Tate square off!

GM Hikaru Nakamura played IM Emory Tate in the 1st round in an exciting encounter out of an irregular opening. Nakamura got strong initiative by sacking a pawn in the middlegame and his pieces dominated the board. Tate fought for counter play and tried to complicate with tactical shots but Nakamura staved off the attack and then promoted his pawn for a queen. Tate sportingly stopped the clock.

Two boards down, this position occurred in Bonin-Paragua… 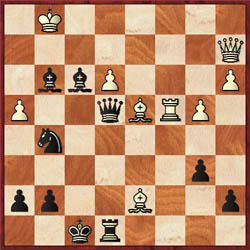 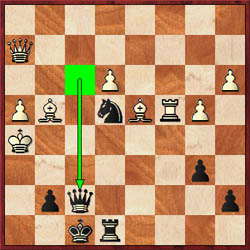