“It should be noted that current opening variations come and go, and the evaluation of certain positions change, but the value of knowing how to play endgames well remains constant.”

It’s always a good idea to go over basic endings before a tournament. You can saving losing positions and win drawn positions merely because one knows the correct technique. In the following position, looks like black pawn is heading for the queening endzone. What is white to do? 😕 Post your variations. 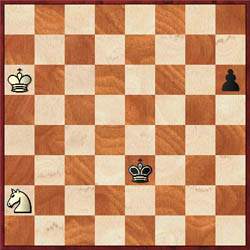 White to Move and DRAW!